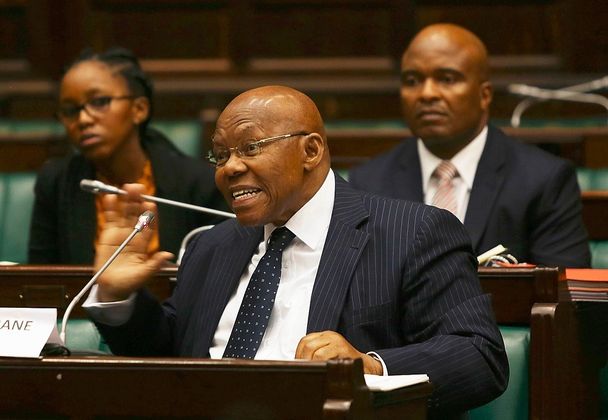 Ngubane says he and Motsoeneng saved the SABC

Ngubane‚ speaking on Friday before Parliament’s ad hoc committee looking into the mess at the broadcaster‚ also insisted Motsoeneng had “saved” the SABC.

“The SABC started haemorrhaging money from 2007 … we found a mess … we did everything…. I reject the idea that the corruption and destruction at the SABC happened because of us … don’t accuse me falsely of destroying SABC‚” a visibly irritated Ngubane said in response to a question from the inquiry’s evidence leader‚ Ntuthuzelo Vanara.

Asked how Motsoeneng came to occupy senior positions at the SABC given that he did not have a matric‚ Ngubane said the former chief operating officer was appointed because of his skills.

He said it was no secret that Motsoeneng did not have a matric certificate and previous boards had been aware of this.

This was despite the existence of a damning 2014 public protector report‚ which found that Motsoeneng had fabricated a matric qualification‚ purged those he disagreed with‚ and irregularly increased his salary from R1.5 million to R2.4 million in one year. Ngubane said Motsoeneng’s huge salary hike was “not an increase‚ but an adjustment” in line with his position at executive level. He said none of the independent auditors or the auditor general had found the salary increase to be irregular.

“Salaries at the SABC are normally very high … Hlaudi came from the provinces at a very low salary. The disparities were huge … this committee must go to the SABC and look through all documents before you can judge us‚” said Ngubane.

He said Motsoeneng’s 63% salary adjustment in one year made sense considering that he occupied a senior position with added responsibilities.

Motsoeneng was the SABC’s group executive manager for stakeholder relations before he was shifted to act as chief operating officer‚ a position he eventually assumed on a permanent basis in 2014.

“He‚ Motsoeneng [in his capacity as head of stakeholder relations]‚ helped re-establish trust between the unions and the SABC. He went to the regions and took me there to talk to people at regional offices. He was hired for his skills. We have done a number of things to make the SABC work … Hlaudi did some wonderful work despite the fact that he did not have a formal qualification‚” said Ngubane.

Ngubane‚ a former KwaZulu-Natal premier and national arts and culture minister‚ chaired the SABC board from December 2009 until he resigned amid controversy in March 2013. He is currently the chairman of the Eskom board.

He told the ad hoc committee that he did not understand why he was called to testify given that the current problems at the SABC happened after he had left.

He pointed out that Motsoeneng became acting chief operating officer during his tenure as board chairman‚ and assumed the position on a permanent basis only after Ngubane had left the public broadcaster. Motsoeneng’s appointment was made despite the public protector’s report.

“I came [to the ad hoc committee] because I have served in Parliament for 10 years and I respect Parliament. I have serious reservations and reserve the right to take further action if the findings are adverse‚” said Ngubane.

He would have wanted to challenge the public protector’s report but was unable to do so because this would have cost him millions.

Ngubane said some of the testimony that the ad hoc committee had heard was “simply meant to damage my name”.

Former acting SABC chief executive Phil Molefe told the inquiry in December that Motsoeneng was promoted ahead of more senior and qualified people to become acting chief executive and then chief operating officer in less than a week.

Molefe said there were glaring governance oversights during his time as acting chief executive‚ including that Motsoeneng was allowed to sit in on board meetings when he was not a board member.

According to Molefe‚ during a meeting in which Ngubane was also present‚ Motsoeneng threatened to “go to Pretoria” – an apparent reference to President Jacob Zuma‚ after he (Molefe) refused to give him a R500 000 increase.

Asked why the ad hoc committee should not recommend his removal as Eskom board chairman — in light of the public protector report‚ which effectively found he had failed in his fiduciary duties at the SABC — Ngubane said he would fight such a recommendation with his all his might.

He said the public protector ’s report was not based on fact‚ and he was “disempowered” because his responses to the provisional report were ignored.

Zandile Tshabalala‚ another former board chairperson‚ was due to testify later on Friday.