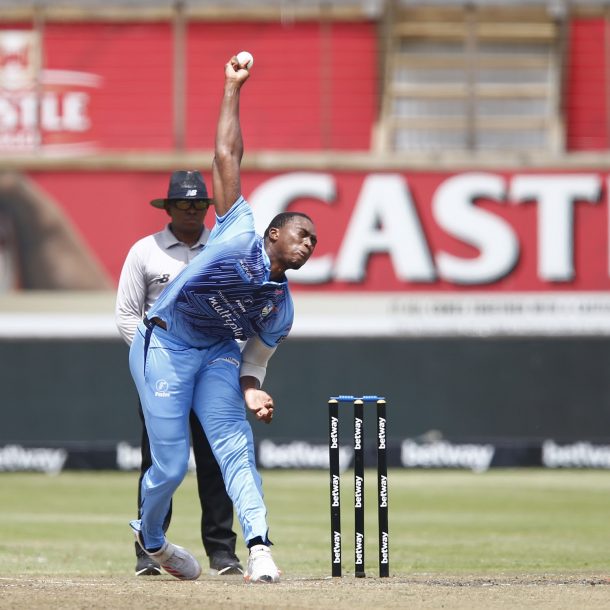 The Titans strike bowler Lungi Ngidi has said he prides himself on making meaningful contributions after leading the Centurion side to a 16 runs win over the Cape Cobras on match day three of the Betway T20 Challenge in Durban on Sunday.

The big Proteas fast bowler finished as the Bowler of the Match after helping himself to three scalps to take his tally to five wickets in two matches as Mandla Mashimbyi’s side made it two wins in a row at the BSE venue at Kingsmead.

The Titans scored 148/6 in their 20 overs after they found scoring difficult after winning the toss‚ but Ngidi’s three wickets were vital as the Sky Blues managed to defend what looked an average victory target.

“We really wanted to get off to a good start and obviously as one of the senior bowlers in the team you really want to lead the pack‚” said 24-year-old Durban-born Ngidi.

“We have got a lot of guys that are actually wicket takers‚ but to be able to contribute a lot to the team is something that I really pride myself in.

“I’m just looking to keep that form going and hopefully go through all the way.”

The Centurion side started with no less than seven Proteas players in their line-up and it was uncapped 24-year-old Durban-born Sibonelo Makhanya who top scored with 47 off 33 balls to earn his Batsman of the Match honours.

All-rounder Dayyaan Galiem came in at number six and contributed 20 runs from 18 balls that gave the Titans something to bowl at.

Ngidi‚ supported by Chris Morris [2/21] and Lizaad Williams (2/25) as they bowled out the Cobras for 132‚ said the professional environment at the most successful franchise is the cornerstone of the Titans successes.

“The guys are very professional. One thing I have always said is that when you leave the Titans camp it feels no different when you are going up to the Proteas camp.

“As you can see as well a lot of other teams are carrying lots of heavy Proteas as well. The professionalism is there and the standards are there‚ and it is showing in the cricket‚” said Ngidi.

“When we are asking a few guys to score the runs they don’t make excuses when it does not happen‚ but as bowlers we have also got to come through with performances.

“It’s a star-studded team‚ so we should be putting in the performances to be honest.”

The Titans‚ who are placed second on the six-team log table after two matches and are behind leaders the Dolphins who have played a game more‚ next face the Lions in the later match on Monday.

Bottom team the Cobras have lost their opening two matches and will aim to get off the mark when they take on another winless side the Knights in the early match.