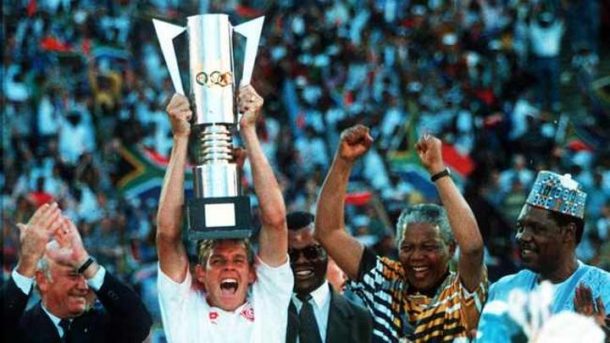 Former Bafana Bafana captain Neil Tovey says the rest of the teams in the DStv Premiership need to to get their act together to reach the impressively consistent levels set by trophy machine Mamelodi Sundowns.

The Brazilians‚ who have won the league championship for the past four seasons and are overwhelming favourites for the fifth title‚ started this campaign with eight wins and one draw.

Sundowns are yet to concede a goal in their nine league matches‚ and have scored 17‚ and it is also worth noting that they are currently on a seven-match winning streak.

“They have a quality team‚ not only the starting 11 but on the bench as well. They can call on players from the bench at any given time to strengthen the team and bring about those big game moments.

“Long may it continue because they are playing on the continent and they must go there and do well. They are going to lose a match at some stage but what is going to be important is how they come out of that loss and show their dominance.

“The rest of the teams must get their act together with consistency in their performances. All the rest of the other clubs‚ you are not sure what is going to come out from them.”

Tovey added that he has been impressed with Stellenbosch FC‚ SuperSport United and Royal AM and he hopes they will sustain their performances for the rest of the season.

“I have been highly impressed with Stellenbosch. It takes a lot from fighting relegation to where they are now. I hope it is not a half-a-season wonder‚ but that they will continue to believe in themselves.

“It is also the result of the good work that they have done in the development of their team for the past couple of years. You also have a nice surprise in Royal AM‚ you can see that they believe in themselves and they have a good team dynamic‚ and club owners who want good for their team.

“They have done one or two silly things but that is the happiness for the game and enthusiasm for success‚ which is great for the game. But it is good to see them there‚ they are the surprise packages and it is good for the coaches‚ who are up-and-coming coaches.

“SuperSport United have been there in the top four for a number of years now‚ AmaZulu did exceptionally well last season and the players now must balance the local league and Africa.

“Benni (McCarthy‚ AmaZulu’s coach) has done well with the club‚ he is in his second season‚ which is always challenging‚ but there are some pleasing aspects.”

Tovey‚ added‚ though: “But all the teams have got to get their act together.”