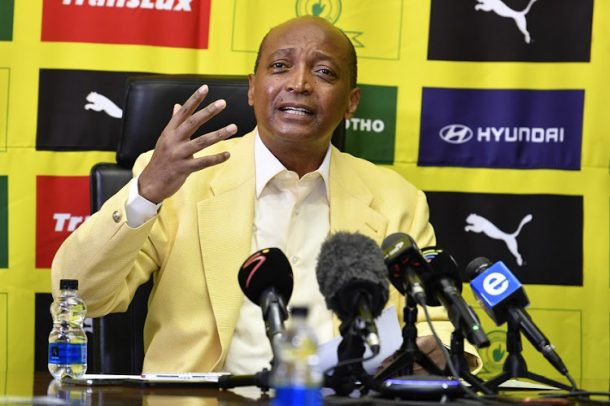 Motsepe on his stake in the Bulls: ‘Rugby brings black and white South Africans together’

Mamelodi Sundowns president Patrice Motsepe has backed the Jake White-led revolution at Loftus as the franchise looks to once again become a dominant force in southern hemisphere rugby.

Motsepe‚ who in December acquired a 37% stake in the Blue Bulls Company (BBCo)‚ said he is excited that World Cup winning coach White has joined the Bulls as Director of Rugby.

“I am excited and I think the Bulls are going to do very well. We have just had Jake White join us recently‚ which is a good thing. There are some great people who are representing me on an ongoing basis there‚” said an upbeat Motsepe.

There have also been moves behind the scenes with Edgar Rathbone arriving in the capital city next month as chief executive to take over from departing Alfons Meyer.

On other transfer news coming out of Loftus‚ White was dealt a massive blow last week when Springbok fullback Warrick Gelant decided to leave the franchise to join the Stormers in Cape Town.

Motsepe said he long considered getting involved with the Bulls and he is happy that a deal has been done because he is also passionate about rugby.

“I have been looking at the partnership for quit sometime and I am very excited. When I was five years old‚ I went to a boarding school in the Eastern Cape and we played football but we also played rugby. So I have a passion for football‚ music and of course rugby.

“The Bulls and Mamelodi Sundowns are both from Tshwane – we both use Loftus. It is an exciting opportunity to use sport to bring our people together because sport unites people from different backgrounds‚ languages and cultures. In the context of the Bulls‚ rugby brings black and white South Africans together.

“It strengthens this common passion for the sport and to get more young black and white South Africans to play for the Bulls.

“As the Motsepe Foundation‚ we sponsor school sports where we want black and white South Africans to play football. We have this developmental obligation whether it is Sundowns or the Bulls‚ and we also sponsor netball at schools and the participants love it very much.”