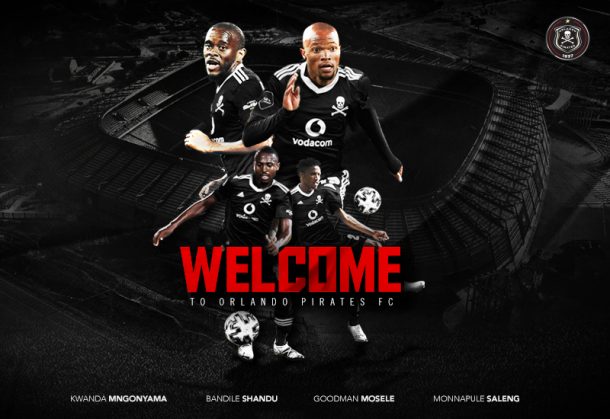 Orlando Pirates have bolstered their squad with the addition of four players ahead of the new season.

Goodman Mosele‚ Monnapule Saleng‚ Bandile Shandu and Kwanda Mngonyama were revealed by the club on Monday as the new Pirates recruits.

The club said 21-year-old Mosele‚ who joins from Baroka FC‚ signed a four-year deal and will link up with his new Pirates teammates upon his return from national duty at the Tokyo Olympic Games where he is with the South Africa Under-23 national team.

Saleng‚ the 23-year-old attacking midfielder who finished as top goal scorer in the GladAfrica Championship last season‚ joined on an initial three-year contract.

Mngonyama and Shandu‚ who both turned out for Maritzburg United in the just concluded season‚ arrived as free agents and have signed two-and three-year terms respectively.

Pirates also announced that they will reduce their playing squad to a manageable size ahead of the new season and confirmed that all the players who are out on loan will be ordered to report for duty at the club for assessments before the technical makes a call on them.

“We met with the technical team last week and they have requested time to assess all the players‚ including those returning from loan before they can present their recommendations‚” Mbele said on Monday.

“With respect to the players whose contracts have come to an end‚ contract negotiations are still ongoing.

“We are in advance talks with their respective representatives and will make the necessary announcements in due course.”

Despite winning the MTN8‚ Pirates German coach Josef Zinnbauer has been under pressure from the club’s demanding fans who were calling for his sacking after another failure to win the Premiership title as they finished third behind champions Mamelodi Sundowns and AmaZulu.

Despite the appointment of former Lamontville Golden Arrows coach Mandla Ncikazi last month to be part of the Pirates technical committee‚ it appears the club’s hierarchy are considering giving the German coach another season or chance.

Pirates announced that Ncikazi signed a three-year contract but did not clarify the functions the former Arrows boss will fulfil under head coach Zinnbauer.