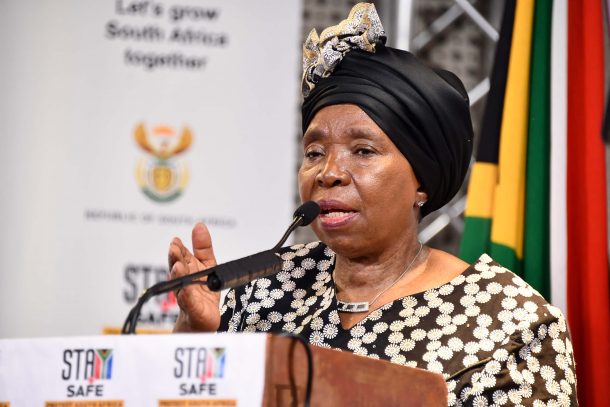 More than 1‚000 families have been displaced in SA by the storm and flooding brought by tropical storm Eloise‚ which hit Mozambique at the weekend and then moved inland.

The storm has caused havoc‚ leaving 13 people dead and others displaced in Zimbabwe‚ Eswatini‚ Botswana and SA.

Co-operative governance and traditional affairs minister Nkosazana Dlamini-Zuma confirmed one fatality in Mpumalanga during a press conference on Tuesday morning.

“Unfortunately in Mpumalanga we have had one fatality … our condolences to the family. Our thanks goes to the search and rescue teams that were able to recover the body [of the deceased]‚” said Dlamini-Zuma.

A second fatality was reported by a search team after the government briefing. A toddler was swept away in a flooded river. Rescuers have also retrieved her body.

Dlamini-Zuma said heavy rains have battered a number of towns. Some floods cut off communities and local authorities are dealing with the damage‚ which includes destroyed buildings‚ she said.

Government teams are still on the ground assessing the extent of the damage.

She said the national disaster management centre was co-ordinating the operations with provincial authorities.

KwaZulu-Natal Cogta MEC Sipho Hlomuka‚ who also part of the briefing‚ said teams were still doing assessments but confirmed a number of people have been affected.

“We have indications that we have 175 houses that have been destroyed by the storm. There are a number of roads and bridges that have been affected but the Department of Transport is dealing with that.

“At Zululand district‚ under Abaqulusi‚ one household has been affected‚” said Hlomuka.

He said there were also reports of two boys who were injured and taken to hospital.

Hlomuka said a further seven houses in uPhongolo municipality were destroyed while six others were partially destroyed.

Limpopo Cogta MEC Rodges Makamu said 78 families‚ mainly in the Vhembe district‚ have been displaced due to the collapse of their homes and flooding.

He said the province had experienced the collapse of bridges and even flooding of a police station in the Collins Chabane local municipality.