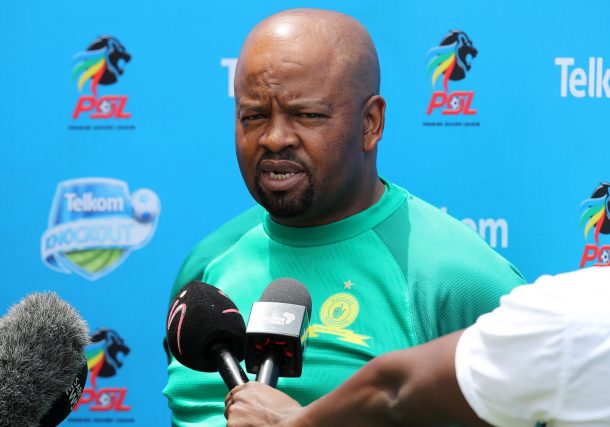 As he surveyed the wreckage following their exit in the semifinals of the Nedbank Cup at the hands of Tshakhuma Tsha Madzivhandila (TTM)‚ Mamelodi Sundowns coach Manqoba Mngqithi tried to make sense of it all.

Mngqithi said it would have been better to lose the match inside 90 minutes‚ instead of going to extra time and finally losing on penalties. The Downs coach said they already have an overwhelming schedule Sunday’s defeat was their fourth outing in ten days.

It doesn’t get any easier for the Brazilians as they have a trip to Durban next and take on high-flying AmaZulu‚ who have won all their last five league matches‚ on Wednesday.

“It is very unfortunate about the extra 30 minutes [of extra time] we played‚” he said as he reflected on the 6-5 penalty shoot-out defeat that denied them a chance to defend their trophy.

“If we knew that we were going to lose this match‚ it could have been better to lose in the 90 minutes. But there is nothing you can do about it‚ the players knows that they have a responsibility in all of those fixtures. They are playing in all these matches because of their successes.

“If it was not for their success‚ they would be playing less games like all the other teams that we are playing against. Because they keep on doing well‚ they must take whatever comes along with doing well and that’s why we say to whom much is given‚ much is expected.”

After the match‚ Mngqithi said his dressing room was devastated but vowed to help his players regain their confidence in time to face AmaZulu‚ who last played eleven days ago.

“You can understand that we are all devastated and wish that things could have turned out differently. We fully understand what is expected of us‚ and we know what is going to happen in Durban because it is not going to be an easy one.

“We still have to go out there and fight‚ our conditioning and rehabilitation departments are working very hard to make sure that we are in a good space to go to the game of AmaZulu and deliver what is expected.

“Everybody is devastated because we kept on making the players aware that it was very important after a big win against Pirates to recollect ourselves coming into this one.

“I cannot fault the players for trying to come out with something‚ but on the day it just looked like we were not going to score no matter what happened.

“The truth of the matter is that the players gave a good account of themselves‚ they pushed but I don’t know why Tshakhuma believed so much. When the game went to extra time‚ they even celebrated but the honest truth is that when you don’t score in a cup match it goes down to this.”