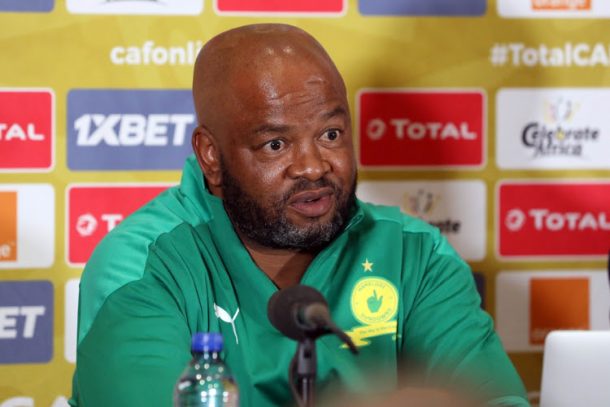 Manqoba Mngqithi has praised his Mamelodi Sundowns charges after the gutsy performance they delivered in their 0-2 defeat to Egyptian side Al Ahly in a Caf Champions League first leg quarterfinal encounter at the Al Salam Stadium in Egypt on Saturday.

Ahly‚ now coached by former Sundowns coach Pitso Mosimane‚ will believe they stand a good chance of defending their title if they are able to repeat the same performance they dished out when they beat the selfsame Brazilians in the same stage of the competition last year.

Saturday’s result was the repeat of last year when Rene Weiler-coached team beat Mosimane’s Sundowns 2-0 in the first leg‚ and drew the return fixture 1-1 in Pretoria to win 3-1 on aggregate.

Mngqithi‚ however‚ believes that Sundowns team are capable of turning the tables at home.

“I’m very happy with how the players performed‚ I think they played very well‚” said Mngqithi.

“And on the percentage of what is likely to happen at home‚ I would give Sundowns 60 and give Al Ahly 40. I think the altitude and the fact we’ll be playing at home will give us a bit of an advantage.

“We’re a team that capable of scoring a lot of goals. The only setback is that we conceded two. If we had conceded one I would easily believe that we would be able to come back stronger.

“We wanted to at least have one goal in this match and it was very unfortunate that we didn’t even get a goal‚ it’s a setback but I know what our team is capable of.”

Mngqithi believes the altitude and the way Ahly approaches the second leg will be a huge factor in deciding the game on Saturday.

“The bigger issue is how they approach the game in Pretoria because it will never last very long if they play it in the same intensity they played with [in Egypt]‚” said the Sundowns coach.

“They will be forced to play a counter-attacking game and I don’t ’think they’re very good in defending in and around the box when they’re playing far too deep in their half‚ which I think made us play a better second half.

“In the second half they didn’t press us from the top‚ but they retreated and that gave us a little bit more latitude to get into their spaces‚ get behind their midfield and also to play in between the lines.

“They’re not a defensive team. They’re normally a very offensive team‚ so if they had to come at us in Pretoria I don’t see them lasting 90 minutes.”