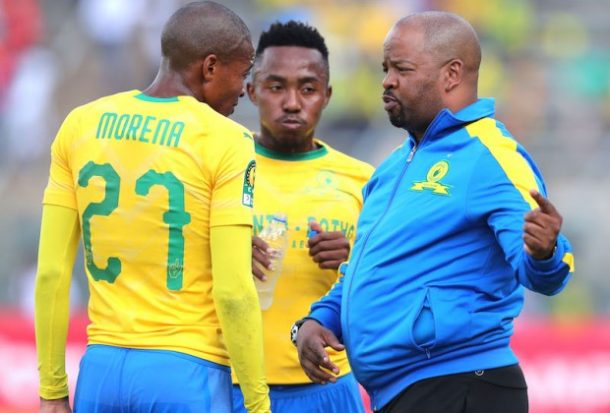 Mamelodi Sundowns coach Manqoba Mngqithi has urged the club’s fans to be patient and not to reach for the panic button just yet as the champions continue to drop points.

Sundowns have drawn three matches in a row and managed to score only one goal during the period‚ results that have enabled rivals Swallows FC and Supersport to catch up as their lead at the top shrunk. All three sides are now level on points [27 points] and Mngqithi’s charges are top by virtue of a better goal difference.

“I wouldn’t say this is a stage where we should panic and start feeling that we have dropped big points because we were not playing against pushovers here‚” said Mngqithi.

“We played against SuperSport United and they are competing up there with us‚” he said.

“We have played against Swallows‚ who are also up there competing with us‚ and we played against Celtic‚ who beat us in the MTN8. Now we managed to get a point form them.

“For me this is not a stage to panic because I think we are on the right track. Maybe one day we will appreciate the points that we got when the team was not as complete as one would have loved.”

Mngqithi further stressed that they have been negatively affected by the absence of players at key positions during this period where they dropped six points from a possible nine.

“We did not have most of the players that normally play in all these matches but we still managed to not lose a game. For me‚ that is a positive for the team.

“At Sundowns you would want to win all the matches that you play but I don’t think people need to panic. We are at a stage where we had to play around with a lot of changes during all these three matches and that had a very negative impact on how we played.

“I believe that the guys who have not played regularly but are coming into the team now have really given a good account of themselves. If you check all the teams that we have played against‚ we played against teams that have full squads‚ not even one of their key players was out but we still managed to get a point.

“Against Swallows‚ we played with Mothobi Mvala as a centre back and I don’t think he has played in that position over the last two to three seasons‚ if not four. But he gave a good account of himself.”