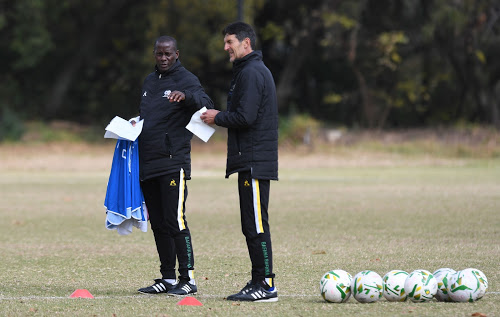 New Bafana Bafana assistant coach Helman Mkhalele has identified many of the pitfalls that have led to the decline of the national team over the years.

The Bafana second assistant said the cornerstone of the downward spiral is the lack of proper development of young players in the domestic league.

Mkhalele was speaking to the media on Monday ahead of Bafana’s international friendly match against the Cranes of Uganda at Orlando Stadium in Soweto at 6pm on Thursday.

“We all know that as a country we should not be where we are‚” said Mkhalele‚ the 52-year-old Newcastle-born former Orlando Pirates player.

“We deserve more than that. But if we continue to work together then I believe that we will achieve our goals.”

Since winning the 1996 Africa Cup of Nations (Afcon) played on home soil at in February 1996‚ Bafana have been on a downward spiral that no coach has been able to arrest.

The decline saw them fail to defend their title as they lost the 1998 Afcon final.

They finished bottom of their group as they were bundled out in the pool stages in Equatorial Guinea in 2015 and failed to qualify for the 2017 edition in Cameroon.

The downward spiral worsened in March this year when Bafana failed to qualify for next year’s Afcon finals in Cameroon.

The failure led to the dismissal of coach Molefi Ntseki and the appointment of Broos‚ whose tenure starts against Uganda on Thursday‚ and his immediate target is to qualify the team for the 2022 Fifa World Cup and the 2023 Afcon.

Mkhalele was appointed as the Bafana second assistant last month and said he will use his knowledge of local players to help head coach Broos and his first assistant Belgian compatriot Janevski Cedomir.

“There are many aspects that need to be addressed at club level. Some of them is that when you look at our players‚ they have got the talent but that talent has never been helped in order to make sure that players go out there and utilise their talents without any reservations.

“When you look at our players currently they have got the talent but they lack that fighting spirit that comes from within each and every player.

“Those are some of the things that I feel need to be addressed at club level so that when the players come to us at the national team it becomes easier to deal with them.”

Mkhalele‚ who is head coach the Under-20 national team‚ said the starting point in turning Bafana’s fortunes around must be that clubs in the local Premier League need to give younger players a chance to play regularly to improve and be ready by the time they are called up for national duty.

“Secondly‚ I’ am not saying that we need to push the youngsters but it is also important that when the juniors are promoted they need to be seen playing more at their respective clubs so that they can gain more experience.

“Those are some of the few challenges that I have identified but they are lot. We just need our teams to make sure that our clubs give these young players some experience at the top level.

“Actually I am happy to see the likes of Kaizer Chiefs and AmaZulu qualifying for Caf competitons and that on its own will give our payers a huge exposure.”