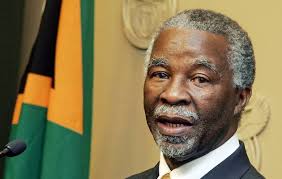 Former president Thabo Mbeki on Monday added his voice to those of others condemning the spate of immigrant attacks in Pretoria last week.

Mbeki was speaking at his inauguration as chancellor of the University of South Africa in Pretoria on Monday.

“All of us know that our country faces many socio-economic challenges. Not any of these problems will be solved by attacking foreign immigrants‚” Mbeki said.

He said South Africa should not forget the enormous sacrifices made by other African counties in South Africa’s fight for liberation.

Mbeki said the country should not characterise African migrants as criminals.

Mbeki said communities should report incidents of crime‚ regardless of the nationality of the perpetrator‚ to the police.

“The SAPS has an obligation to follow up on all crime reports‚” Mbeki said.