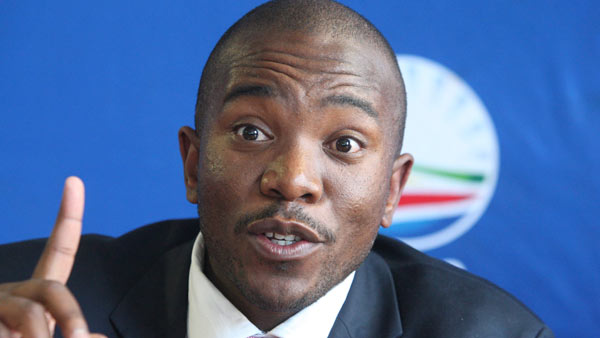 DA leader Mmusi Maimane has accused the ANC of trying to “intimidate” his family after former president Kgalema Motlanthe visited his father in Dobsonville‚ Soweto at the weekend.

Motlanthe and ANC Gauteng chairman Paul Mashatile were on the campaign trail in Johannesburg on Saturday when they reportedly paid a surprise visit to Maimane’s father‚ Simon‚ who used to be an ANC supporter.

According to the Sunday Times‚ Motlanthe said they had spoken to him who “received us very well“.

Simon Maimane reportedly refused to speak to Motlanthe in front of the media so the ANC delegation met him in private.

Mmusi Maimane on Sunday‚ during a public meeting in his hometown of Dobsonville‚ questioned why the ANC felt the need to do this.

“Why do they feel justified in sending their heavyweights here to try and intimidate my family?‚” he asked.

“I’ll tell you why. It’s because they are scared and they are desperate. They can feel metros like Johannesburg slipping from their grasp‚ and they have run out of legitimate ways to stop this from happening.”

Maimane accused the party of using “cheap stunts” saying nothing was off limits even someone’s family.

However‚ he said this would not work.

“We are not intimidated. No amount of dirty politics will stop the change that is coming here.”

The August 3 polls is set to be a fight for the country’s metros as the DA has vowed to wrestle control away from the ANC in cities such as Johannesburg‚ Tshwane‚ Ekurhuleni and Nelson Mandela Bay.

Political parties are continuing to criss-cross the country in a last bid to convince citizens to vote for them in this year’s municipal elections.

Media solutions company BaseMedia said with less than a month to go until the polls‚ political parties would work on heightening their exposure by aiming to drive their message in the media.

Last month‚ the ANC dominated coverage despite it grappling with the negative response to the announcement that MP Thoko Didiza would be its mayoral candidate for Tshwane.

Protests broke out in the capital city and five people were killed.

“As this coverage subsided the organisation was able to direct more media focus towards its election campaign as senior party leaders began making appearances in various communities in the country‚” BaseMedia said.

“In the run-up to the election‚ the ANC will likely aggressively pursue this strategy and deploy more high profile personalities on the campaign trail to continuously spike media interest.”

The DA managed to actively maintain its media presence‚ as the ANC advanced its‚ the company said.

It said the DA was able to draw positively from the way the violence in Tshwane framed the ANC at the time.

“This came as media reflected on … how the fracturing in the ANC would work towards the DA’s advantage in the election‚” BaseMedia said.

“The party also leveraged significant coverage from the “Jobs not jets” campaign which was launched during the middle of June and then peaked at the end of the month with the unveiling of the party’s billboard in Johannesburg.”

The DA believes that government would be wasting money if it makes good on its intention to buy the president a new jet for R4bn.

The party has launched a petition against the purchase of the new presidential jet. BaseMedia said this had strengthened Maimane’s profile.

In terms of the EFF‚ the media company said the red berets struggled to advance its media profile last month‚ as it had lost coverage to the ANC.

“What the EFF has lacked has been a high profile media event or campaign to give momentum to the organisation.

“With Parliament also in recess the party has also been unable to gain media attention‚ as parliamentary reporting has often been the biggest driver of coverage‚ particularly due to the brash antics of EFF members‚” it said.

BaseMedia said EFF leader Julius Malema has had a reduced media profile‚ which was often limited to campaigning events such as his visit to Tembisa.

Last month‚ an armed group of men attacked EFF members during a walkabout in Tembisa.

Malema and other party members visited the Sethokga Hostel to visit the families of Tsietsi Mothibe and Kenny Matjamane‚ who were killed during an election campaign in May. They were forced to retreat from the compound by a group of men carrying sjamboks and pangas.