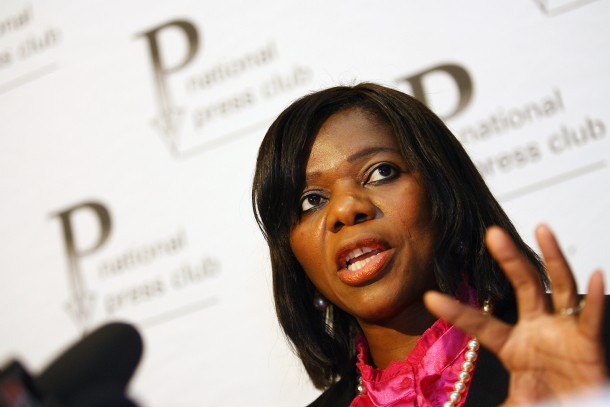 Public Protector Thuli Madonsela has “grilled” one of the Gupta brothers as part of her investigation into the family’s influence on the South African government.

On Tuesday Ajay Gupta was intensely interrogated for several hours by Madonsela at her Pretoria office.

Madonsela said although she intended to subpoena all the Gupta brothers, Ajay, accompanied by his lawyer and two bodyguards, had requested the meeting a few weeks ago and it was arranged.

She said: “It was arranged with the investigating team. It was very cordial and very helpful.”

Madonsela confirmed that she had requested a meeting with the other Gupta brothers but they were out of the country.

She asked if she could conduct the interview with them on Skype but they said they were not available on Skype, she said. “We are still going to consider what we can do.”

The interviews form part of Madonsela’s high-profile probe into allegations of the affluent family’s influence in the deployment of cabinet ministers.

This investigation stems from revelations by Deputy Finance Minister Mcebisi Jonas and former ANC MP Vytjie Mentor that they were offered ministerial positions by the Guptas.

Ajay and Atul Gupta are said to be close friends of President Jacob Zuma and are involved in business dealings with his son, Duduzane.

Madonsela is also scrutinising all the business deals and operating licences issued to the family by the government following a complaint by DA leader Mmusi Maimane.

Yesterday, an investigator close to the matter said Jonas, in his interview, alleged that the family had tried twice to get him to accept their offer of finance minister.

According to the investigator, Jonas said he decided to come out when the offer was presented for the second time. “He said that was when he decided, ‘this is it’.”

Jonas dropped the bombshell in March, days after Mentor revealed she had been offered the public enterprises portfolio after minister Barbara Hogan was fired.

Jonas is among senior government officials who have been interviewed by Madonsela. Others include Finance Minister Pravin Gordhan, Trade and Industry Minister Rob Davies and former communications minister Siphiwe Nyanda.

Madonsela said she was considering summoning Fana Hlongwane, a businessman who was at the centre of the arms deal scandal, following his suggestion that Jonas lied about the Guptas offering him the ministerial position.

In a letter sent to the public protector’s office and published in The Citizen yesterday, Hlongwane said the meeting was to sort out issues between himself and Jonas, and that a member of the Gupta family entered the room and left.

Madonsela said a meeting was requested with him but he refused and instead opted to write a letter.

She said: “If he wants those views integrated in the report, he has to put his statement under oath.

“He cannot put his statement there in the media where it cannot be interrogated under oath.”

Madonsela subpoenaed the secretary of cabinet for the ministers’ declarations and cabinet minutes for the six-month period from November last year to April.

Madonsela has less than eight working days left in office and said her team was doing its best to release the report before she leaves.