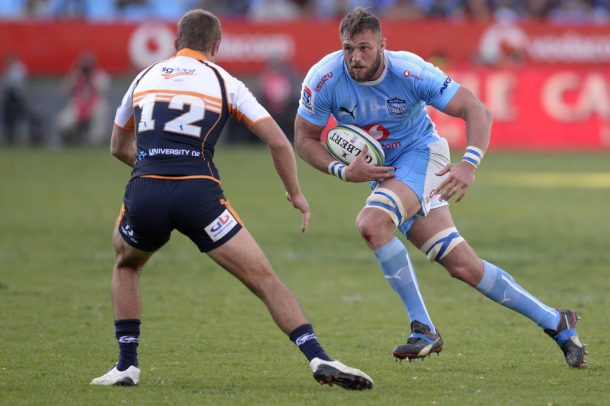 Lock Jason Jenkins wants to use his short three-month loan stint with the Bulls in the Super Rugby Unlocked tournament to stay on the radar of Springboks coach Jacques Nienaber and director of rugby Rassie Erasmus.

The 24-year-old Jenkins‚ who is based in Japan and attached to Toyota Verblitz‚ agreed to a loan deal at Loftus in a bid to enhance his chances of a recall to the Boks where he is competing with established players like RG Snyman‚ Lood de Jager and Eben Etzebeth.

“It’s every South African player’s dream to wear the green and gold jersey but you have to work hard for it‚” said Jenkins‚ whose solitary Springbok appearance was in 2018 against Wales in Washington.

“That was one of the things I spoke to Jake (White) about in deciding to coming back to have a stint with the Bulls. I just wanted to get back on the map because sometimes if you sit in Japan‚ it’s a question of out of sight and out of mind.

“Coming back was just to put myself on the map for the coaches‚ but I know very well that I still have to perform on the field and play hard to be considered.

“It is a massive goal for me to return to the Springboks but for now my main focus is to try and do my best for the Bulls while I am here for the three months and see what happens.”

Jenkins‚ who gave a solid performance in the Bulls’ 30-23 win over the Griquas last weekend‚ said his contract with Verblitz allows him to play for the Springboks if selected.

“I have a clause in my contract with my club in Japan that makes me eligible to be selected for the Boks while I am there. I am sure my team will release me‚ obviously for them it’s a bonus to have a guy playing international rugby.

“They are pretty lenient on that in Japan and if I were to be selected for the Boks‚ I am sure they will not have a problem. Especially with their season only starting in January‚ so there is still time before that.”

For now‚ Jenkin’s focus is on the next match against the Cheetahs in Bloemfontein on Friday where he will be up against counterpart and personal friend Carl Wegner.

“It would be nice to put up a man of the match performance.

“I actually know Carl very well because he played with me in Japan and we are good friends. We actually had a chat after last week’s game. I will definitely try and put a bit of pressure on him.

“It’s always nice playing against some friends because you can put them under pressure‚ and hopefully we can get the win‚” concluded the second-rower.