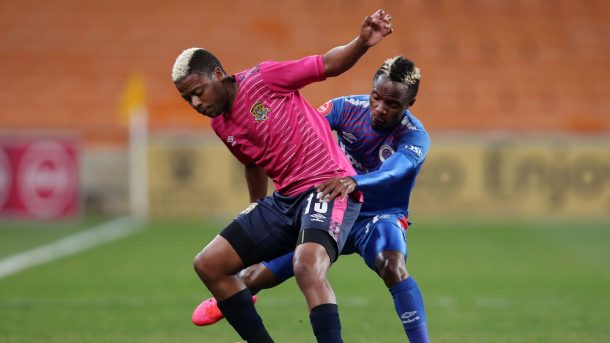 Black Leopards are desperately trying to recover from the heartbreak of losing to SuperSport United in the last minute of their league match on Tuesday.

Leopards‚ who are 13th on the standings and only two points clear of bottom of the log Polokwane City‚ face AmaZulu in a ‘relegation six pointer’ at Lucas Moripe Stadium on Saturday and co-coach Mongezi Bobe said they are determined to put the heartbreak behind them.

Bobe‚ who is in charge of Leopards’ survival mission with Morgan Shivambu following the recent shock departure of Alan Clark‚ said the defeat may create doubt in the minds of the players at this crucial stage of the campaign.

“It’s going to be difficult to motivate the players to pick themselves up but we must to talk to them because in football you win some and you lose some‚” said Bobe.

“We have been winning games recently which helped our cause to avoid relegation‚ but we lost. We have to assure the players that this is not the end of the world and if there is no doubt in their minds about their capability to save this team. They must forget about this loss to SuperSport because there is nothing we can do about it.

“We have to make sure that we focus on our next game against AmaZulu and players must approach that game with their heads up. They fought well against SuperSport‚ it’s just that we conceded a goal during a crucial phase of the game where there is little time to launch a comeback but it’s in the past and we have to move on.”

SuperSport’s goal by Ghampani Lungu during the last minute of regulation time came after Leopards midfielder Lefa Hlongwane was disposed in the midfield by Aubrey Modiba.

“In football you win as a team and lose as a team and you cannot blame a player like Lefa (Hlongwane) because it was a mistake. He has been doing very well for us recently and these things do happen in football. Some of these boys are still young and you have to guide them properly and we lost the game together. It was one of those mistakes that we got punished from.

“We could have defended better for the goal because we allowed a player to make a run where no one was following him. If you go to sleep in the last minute‚ you will be punished‚ but it’s a lesson learned and we move away from it. It’s painful but there is nothing we can do about it‚ we have to focus on our next game.”

Bobe said they are expecting a fight from AmaZulu who are also battling in the relegation zone.

“There are no easy games at this stage of the season because other teams are fighting to win the league‚ others are trying to get into the top 8 and we are trying to survive.

“We would have liked to collect three points or even a draw against SuperSport but we didn’t get it‚ we have to will the soldier on because there are other games coming. When you are fighting relegation it is tough‚ but we have to grind out a result against AmaZulu on Saturday.”