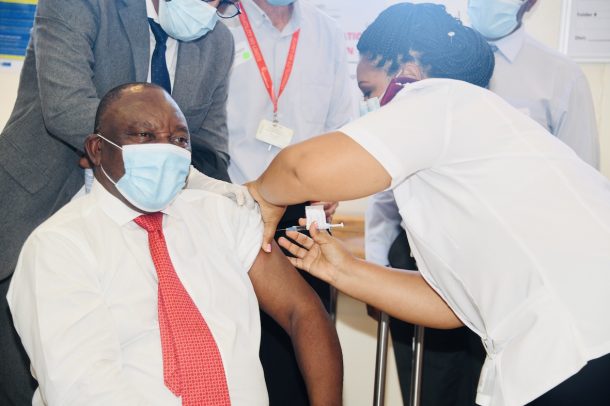 President Cyril Ramaphosa was praised by many for leading by example as scores witnessed him receive the Johnson & Johnson vaccine in Khayelitsha Hospital in Cape Town.

80‚000 vaccines arrive at OR Tambo on Tuesday‚ and Ramaphosa and health minister Zweli Mkhize joined health-care workers who received the first jabs on Wednesday.

Ramaphosa admitted that he was scared to get the injection‚ saying he was pleased that five health-care workers got jabbed before him. He described the occasion as a milestone for SA.

“At first I was a bit terrified of this long needle that was going to be embedded into my arm‚ but it happened so quickly‚ so easily‚ it was just a prick on my flesh and I really did not feel much pain.

“I was rather pleased that five people were vaccinated before me. They were health workers‚” he said.

The province received 13‚000 of the 80‚000 jabs‚ all of which will be administered to health-care workers.

On February 1‚ SA received 1 million doses of the AstraZeneca vaccine from the Serum Institute of India. These were found to be less effective in protecting against the dominant 501Y.V2 variant. The jabs will be shared with other African countries via the AU.

Detailing the Covid-19 rollout strategy last week‚ health minister Zweli Mkhize said he would be among the first to get the life-saving jab and that other leaders had also expressed their willingness to show people that they are safe.

“I’d really love to take the vaccine. That matter is being discussed on how we deal with leaders taking the vaccine.

“I’ve been approached by leaders who said people are not sure whether the vaccines are safe and they have offered to be vaccinated for people to see they are safe‚” he said.

On Wednesday‚ Ramaphosa said more vaccines were expected to arrive in SA. He said he was positive that the rollout will be a smooth process.