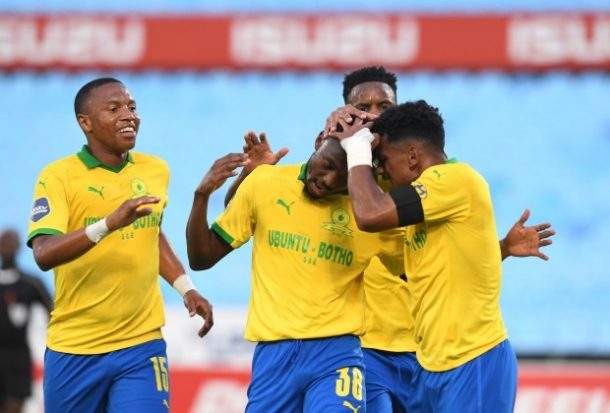 Hopes of a nail-biting finish to the season are evaporating fast after premiership leaders Mamelodi Sundowns tightened their grip on the title on Sunday afternoon as the race enters the final straight.

The champions made their game in hand over second-placed AmaZulu count when they beat TS Galaxy at Mbombela stadium in Nelspruit to increase their lead at the summit to seven points‚ with four games remaining in this campaign.

It was that man Peter Shalulile who once again delivered the goods when he reacted the quickest inside the Galaxy box to put the visitors in the lead with a well-taken header in the 17th minute.

Sundowns floated the ball inside the area from the corner kick but as Galaxy struggled to deal it‚ the razor-sharp striker rose above everyone else and punished the home side to break the deadlock.

Galaxy goalkeeper Westen van der Linde did not know much about the goal as the ball had bobbed around inside the area before the alert Shalulile finally buried it in the back of the net.

Sundowns continued to pile on the pressure in search of a second and came close when Lebohang Maboe beat his man but could not find the target with his header in the 27th minute.

The home side had an opportunity to draw level very much against the run of play after they were awarded a penalty by referee Tshidiso Mkhwanazi in the 31st minute.

Galaxy coach Owen da Gama had the anxious look of a man who had played the Lotto and was waiting to hear the confirmation of the winning numbers as he watched Lindokuhle Mbatha walk up to the spot to take the penalty.

The anxiety was quickly replaced by a devastating look of misery after Sundowns goalkeeper Kennedy Mweene correctly guessed the direction of Mbatha’s kick to deny the home side with a spectacular save.

Mbatha returned to torment the visitors moments later but captain Ricardo Nascimento did well to clear the danger.

Besides saving the penalty‚ Mweene had very little to do in the remainder of the first half and the two teams went into the break with the Brazilians still in the lead.

Galaxy returned with a bit more purpose in the second period and tried to make a game it.

But they never really rose to great heights as they found Andile Jali in an uncompromising mood in the middle of the park‚ with the midfielder making telling tackles and also delivering important passes to his team-mates.

Chances were very few in this encounter and Da Gama will rue that missed penalty by Mbatha as it may have changed the direction of this match‚ or in the very least earned them a point at home.

Shalulile has been a revelation for Sundowns since moving from Highlands Park in September last year and is now zeroing in on his own personal ambitions as he trains his sights on premiership top scorer Bradley Grobler.

Grobler leads the premiership scorers’ charts with 13 goals‚ but Shalulile is snapping at his heels with 11 strikes with four games to go.

AmaZulu will hope Sundowns’ continental engagements in the Caf Champions League this week prove to be a psychological distraction as the Brazilians face a familiar foe with the potential to absorb a fair amount of their energy in the coming days.

Sundowns travel to Egypt on Tuesday to face former coach and favourite son Pitso Mosimane’s Al Ahly in a Champions League showdown that will have the whole continent salivating on Saturday.

It is a match that has already captured the imagination as Mosimane will be under pressure to beat his former team or risk putting his job under scrutiny in Cairo‚ while his adversaries on the bench – Manqoba Mngqithi‚ Rulani Mokwena and Steve Komphela – would like nothing more than to get the better of a man who led the selfsame Sundowns to several titles during his now legendary almost decade-long stay in Chloorkop.

Sundowns’ remaining matches in the domestic league this season:

vs Supersport United on May 26

vs Swallows FC on May 29

vs Bloemfontein Celtic on June 2

vs Cape Town City on June 5