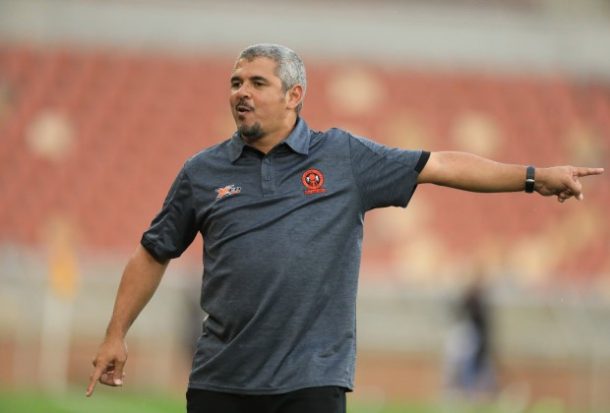 Basement side Polokwane City are knee-deep in the relegation quicksand but coach Clinton Larsen remains optimistic that they will survive when the curtain comes down on the Premiership season on Saturday.

City have two games remaining this season to pull off a dramatic escape and have to snatch six points from title-chasing Mamelodi Sundowns at Loftus on Wednesday in the penultimate round of the campaign‚ and against Bidvest Wits at FNB Stadium on the final day on Saturday.

“We are not playing like a team that has given up and that gives me lots of optimism‚” Larsen said as they prepared for their Sundowns examination.

“I see it at training everyday that the players are confident‚ and I see it with the performances we are giving on the field‚” he said.

“I see the energy and the intensity at training and when you see this you have to remain optimistic that we are going to get it done.

“We have two cup finals we have to win and it is as simple as that.”

But it will take some doing as City have not won in their last five league matches in a run that includes successive losses to Maritzburg United‚ Kaizer Chiefs and SuperSport United and draws with Highlands Park and Bloemfontein Celtic.

They face a Sundowns side that will be looking to return to winning ways to stay in contention in the title race following the 1-0 defeat by Baroka FC on Sunday.

“We know what we have to do against Sundowns. If you look at our recent performances against Chiefs‚ Highlands Park and Celtic‚ they were good. We are just not scoring the goals and I think if we get that right in our last two matches‚ we can get the results.

“We must be clinical against Sundowns.

“This reminds me of a time when I got to Chippa United a few seasons ago where everybody said the team was going to be relegated.

“Against all odds we saved the team and this is exactly the same situation because everybody has written Polokwane City off. It is up to us to prove everybody wrong now.

“Every team at the bottom is saying the same thing and for us if we get a win against Sundowns we jump two places up on the log. That is the same with teams above us‚ if they win‚ they jump two places.

“We are not even looking at the game against Wits‚ our focus is only on Sundowns. We want to make sure that we get the three points and that will take us out of where we are at the moment with one game remaining. Yes‚ this is a massive game for us.”