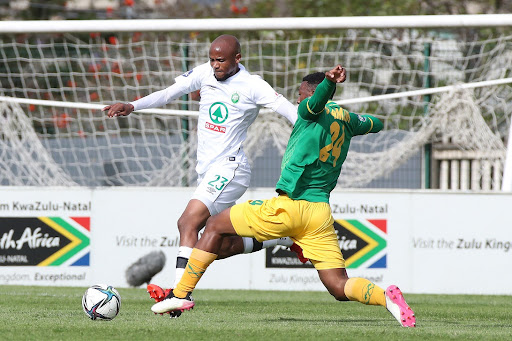 Benni McCarthy’s AmaZulu remain without victory in the DStv Premiership after playing a 2-2 draw in the KwaZulu-Natal derby against neighbours Lamontville Golden Arrows at Sugar Ray Xulu Stadium in Durban on Wednesday.

But Usuthu scoring their first league goals may give McCarthy reason to be hopeful that his side‚ which finished second in the Premiership last season‚ might turn the corner soon having collected just three points from a possible 12.

Arrows‚ who had striker Knox Mutizwa missing a second penalty awarded to them in the first half‚ looked to have stolen all the three points when their substitute captain Matome Mathiane was left free to head in Thubelihle Magubane’s corner in the 77th minute to make it 2-1.

But Usuthu immediately bounced back‚ with Sphesihle Maduna forcing Nkosinathi Sibisi to foul him inside the area in the 78th minute for Bongi Ntuli to slot the equaliser from the spot.

The game started with Usuthu producing most of the attack and after they had three shots on target they were finally rewarded with their first league goal of the season when midfielder Xola Mlambo steered home Sphesihle Maduna’s corner‚ which was first attacked by veteran defender Tsepo Masilela‚ in the 24th minute.

Arrows had started slowly and only had their first attempt on Veli Mothwa’s goal in the 26th minute‚ three minutes before Mutizwa (30th) beat the AmaZulu gloveman from his team’s first penalty of the match after Masilela had handled Mthokozisi Dube’s cross inside the area.

The watchable opening half looked to produce more goals in favour of Arrows a minute before the break when Luvuyo Memela stood on top of Nkosinathi Sibisi’s foot inside the box‚ giving referee Victor Gomes no option but to point to the spot again in favour of the home side.

Mutizwa missed a chance to remain just one goal short of equalling Mabhudi Khenyeza’s all-time club record of 45 goals‚ his penalty this time beating Mothwa but not the upright. Mothwa did well to also block Pule Mmodi’s shot off the rebound‚ helping his side to go to the break with the score levelled at 1-1.

The second period began a little scrappy‚ with both sides unable to build and finish their attacks with decent shots on goal. Usuthu were the worst culprits in creating opportunities in the second half and only had a good shot on goal in the 60th minute when Maduna’s well-taken free kick was saved by Mlungwana.