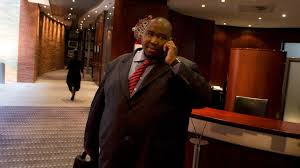 President  Jacob Zuma’s nephew Khulubuse Zuma has been named as one of the rich and powerful people who use tax havens to hide their wealth off shore.

11 million documents were leaked from one of the world’s most secretive companies, Mossack Fonseca law firm in Panama. The financial documents show how Mossack Fonseca has helped its clients launder money, dodge sanctions and evade tax.

Khulubuse Zuma was named in the cache of documents  which reported that he was associated with a company called Caprikat that is registered in the British Virgin Islands that he represented in concluding an oil deal.

“Zuma does not and has never held any offshore bank account”said Khulubuse’s  spokesperson Vuyo Mkhize. “Firstly I think we must clarify what the information that has been released is all about. The report does not say that Khulubuse holds an offshore bank account, it merely states that he was associated with a company registered offshore.”

“His simple position is that he signed the agreement on behalf of Caprikat, but the question of his status within the company is something that he is not at liberty to comment on,”. Mkhize added.

Mossack Fonseca  says it has operated beyond reproach for over  40 years and has never been charged with criminal activities.