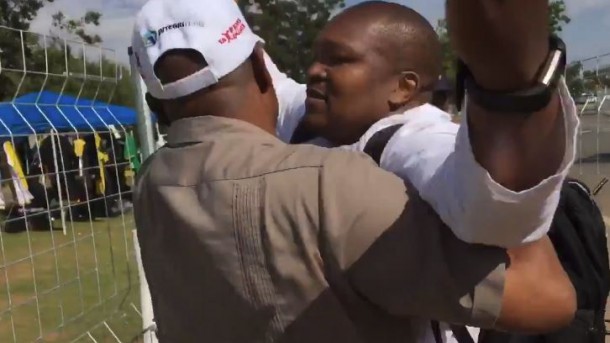 Journalists complain about bullying by security at ANC conference

Journalists attending the ANC’s national elective conference have charged they have been having a hard time reporting on developments at the gathering because of bullying by security guards.

Several journalists covering the event complained about being shoved and manhandled by security guards as part of stringent security measures to keep journalists from interacting with delegates.

On Wednesday‚ the accreditation of the chairperson of South African National Editors Forum’s sub-committee on media freedom and Bloomberg’s correspondent‚ Sam Mkokeli‚ was revoked. This was after he argued briefly with a security official on why journalists were made to wait for over an hour in the sun for a walk-about by newly elected ANC president Cyril Ramaphosa when in fact he was not ready to address the media.

Following this incident‚ a number of journalists came forward and revealed how they have been abused by security to a point of being threatened and chased out of the venue and also having their accreditation revoked.

Taking to the party’s conference WhatsApp group‚ a few journalists shared their experience.

“Yesterday my tag was almost taken away because a provincial leader stopped to talk to me outside the plenary‚” she said.

Power FM’s Tehilla Niselow said a photographer who was at the plenary for the announcement of the new top six leadership‚ was bullied despite informing the security that he was disabled.

“A disabled photographer was pushed yesterday in plenary. He kept telling ANC security he was disabled but they didn’t listen and pushed him to the floor because he couldn’t move fast enough” said Niselow.

Mail & Guardian political columnist and independent analyst Richard Calland also experienced a similar incident when a delegate was seeking advice from him.

“I was threatened with having my accreditation taken away by a security man because I was talking with a delegate who had stopped me to ask about where it would be best for him to do a law degree‚” said Calland.

Newly elected ANC chairperson Gwede Mantashe told reporters a week before the commencement of the elective conference that the ANC would be clamping down on leaks at the conference and would not allow journalists and delegates to interact about the developments inside closed sessions.

It appears that security had been instructed to keep a close eye on journalists to a point of escorting members of the media in areas strictly reserved for delegates.

Sanef chairperson Mahlatse Gallens said they had spoken to the ANC and the security cluster about returning Mkokeli’s accreditation as well as about the need to have meetings ahead of such conferences of this magnitude.

“There was an agreement on both sides – the ANC communications‚ ANC security as well as Sanef – for the need to continue to meet ahead of such big events that they have so that we can look at their plans. As Sanef‚ we would like continue to urge the ANC to be transparent in order to allow the free flow of information but also to say to reporters ‘let’s respect the rules’‚ as uncomfortable and undesirable as they are‚” she said.

“With regards to the Sam Mkokeli matter‚ they have now gone to security to engage with them about returning the accreditation so we are hopeful that it will be returned‚” said Gallens.

The ANC and Mkokeli were not immediately available for comment.