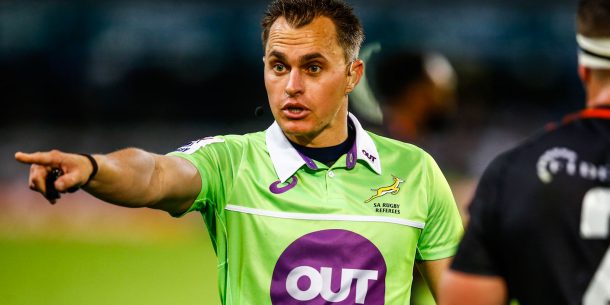 Usually they’re crisscrossing the globe to destinations where they boss blokes twice their size as just part of the job.

If you are one of rugby’s top match officials the Covid-19-enforced lockdown must be a huge departure from your comfort zone. It can almost reasonably be assumed referees and TMOs must by now have developed cabin fever‚ while becoming a nuisance to those they routinely leave behind.

“My wife said I’m far kinder to the rugby players than I am with her. It would appear I’m a bit of a taskmaster‚” revealed South Africa’s top referee Jaco Peyper.

He throws his weight around in a meaningful way at home‚ helping with cooking‚ home schooling his two young daughters and manicuring the garden‚ when he isn’t in work-related virtual meetings.

“My garden looks an absolute picture. Everything is well kept‚ the grass is growing properly and it looks as if I’ve developed green fingers. I think maybe it was just in need of a bit of love.”

The home schooling at times‚ however‚ is as tricky as keeping count of the number of jumpers in the lineout. “What I can tell you is the maths the kids are doing in Sub-A‚ or Grade One‚ is what we did in Standard Five‚” said Peyper‚ who is regarded as one of the top three refs in the world.

Maths may not get his juices flowing but a good steak does.

“Jis‚ now I can braai. In the past I thought I could‚ but now I can. We tried a lot of new recipes.

“I’m in the catering business. I own a coffee shop. I’ve always enjoyed cooking and my wife does as well. We love experimenting. We involve the kids as well.”

Peyper is not the only official who has warmed to domesticity. Fellow ref Rasta Rasivhenge now knows an apron isn’t just the place he walks to‚ to board a plane‚ while at the other end of the scale‚ TMO Marius Jonker knows just adding whatever‚ is no real jus.

Apart from working on his fitness and lamenting the amount of time he has spent watching screens big and small‚ Rasivhenge says he has been reading‚ while also engaging in some introspection. He claims to be more comfortable in the kitchen and can even present edible gem squash‚ which apparently was not the case pre-lockdown.

He may be turning more knobs on his oven but he isn’t about to present his creations for mass consumption. Instead‚ Rasivhenge is part of a scheme that delivers food to the needy in Imizamo Yethu and Hangberg in Hout Bay.

Jonker is at the other end of the epicurean scale. “I love cooking‚” he said animatedly. “I experiment with food every day. My 14-year old daughter is my guinea pig. I love pasta‚ I make my own. I’m into Thai food. I love experimenting with spices.

“Last week I did a Mozambican prawns cooked in beer. Look‚ not everything comes out the way you intended‚” he admitted.

He‚ too‚ is in endless online meetings but helps out where he can. “My son [Rynhardt] who is at the Sharks‚ is at home and we train every day. I’m reasonably fit but the speed … is no more. We jump over the local school’s fence and we practice kicking.”

Jonker and Peyper said they miss the challenge and pressure match day presents.

“When you wake up on a Saturday you don’t quite know what kind of game you are going to get‚” said Peyper.

“I also miss the camaraderie‚” said Jonker. “The rush. Those moments when you have to make those big calls. I love the pressure.”