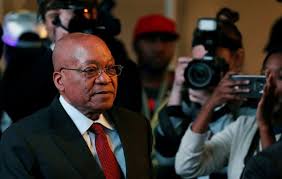 This comes after the National Prosecuting Authority on Tuesday declined to prosecute Downer on charges laid against him by Zuma for allegedly leaking his medical records‚ due to insufficient evidence.

Zuma filed the charges at the Pietermaritzburg police station in October.

On Wednesday his foundation said a private prosecution has to be instituted within three months of the date of the certificate.

“That period expires on September 6 2022. The prosecution will be instituted long before that date as the legal team had already started all the preparatory work. The draft charge sheet is ready.”

The foundation wants Downer removed from Zuma’s corruption trial when it resumes in August‚ pending the private prosecution.

It called on National Director of Public Prosecutions Shamila Batohi “to remove Mr Downer‚ who will soon be known as Accused Number One‚ from the current proceedings in the Pietermaritzburg high court so the matter may finally get under way without avoidable delays”.

Zuma’s previous attempts to remove Downer as lead prosecutor in his trial have been unsuccessful‚ the most recent in May when the Supreme Court of Appeal dismissed his case.

Zuma is accused of receiving an annual bribe of R500‚000 from French arms dealer Thales for protection from an investigation into the controversial arms deal.