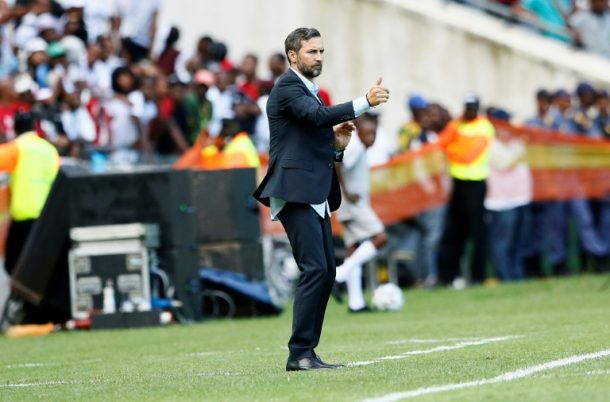 I’m sorry for this word I used’: Zinnbauer after uttering an expletive following defeat to Chiefs

The disappointment of losing his first Soweto derby got the better of Orlando Pirates coach Josef Zinnbauer moments after the defeat to Kaizer Chiefs at FNB Stadium on Saturday.

Responding to a question on the 1-0 Absa Premiership loss that has virtually eliminated the Buccaneers from the league title race‚ Zinnbauer let it rip with an expletive and said the result felt like ‘s***’.

Though he praised the performance of his players as they stuck to the attacking style of football they have displayed since he arrived in the country in December‚ Zinnbauer lamented the defeat to the Chiefs.

“We made a good performance and I am sorry for the result which was s***‚” he said before he quickly apologised.

“I am sorry for this word that I used and I hope you understand but I am a bad loser.

“Whether you know me or you don’t know me‚ I am a bad loser. We did our best but we did not have the little extra thing that you need to win the derby.”

Pirates remain third on the log standings with 39 points from 22 matches but they trail log-leaders Chiefs by nine points who have played one match less.

Zinnbauer said his immediate focus is on motivating his players and helping them to regain confidence ahead their eight remaining matches this season.

“Now it’s important that we keep our heads up‚” he said.

“It is easier for me to say that we have a good performance but we lost the game and I am not happy about this.

“You saw the atmosphere inside the stadium from the fans‚ it was a great from both supporters.

“We had self confidence‚ we had a good plan and we created a lot of chances but if you don’t score you have no chance to win the match.

“The performance of my team was good‚ in the last minutes of the game we did what we had to do but it was not enough to win against Chiefs.

“You are going to have a problem against a team that has a good defence‚ they are tall and is not easy. We did our best and the plan was good but I am not happy about the result.