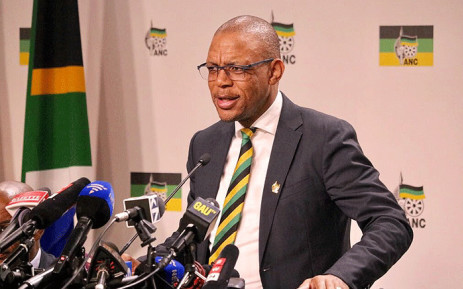 ‘I have never sexually harassed anyone in my life’: Pule Mabe speaks out after ‘suspension’

There appears to be a “complete disregard to one’s right to dignity”‚ ANC spokesperson Pule Mabe said on Tuesday.

Mabe said this in a statement around midday‚ shortly before the ANC was to hold a media briefing after the party’s national working committee (NWC) reportedly decided to suspend him and Zizi Kodwa.

“It is not in my nature to entertain slander and to borrow from the novel by the late renowned African writer Chinua Achebe‚ Things fall Apart: Things indeed seem to be falling apart with what appears to be a complete disregard to one’s right to dignity.

“Unfortunately I must now speak for myself and protect my family from further humiliation. I have never sexually harassed anyone and will subject myself even to the highest court in the land to prove my innocence. I will not allow my name to be used to pursue nefarious agendas whose sole motive is character assassination.”

Mabe was responding to what he described as “interesting and sensational” reports quoting ANC NWC “insiders” who said that he and Kodwa had been suspended.

Mabe said: “For the record‚ at the time of issuing this public statement such a matter had not been brought to my attention.”

He added: “I restrained myself from making any public statements. If true the latest leaks … that I have been suspended and details of which I am not privy to as yet will be interesting.”

Business Day reported on Tuesday that that Kodwa’s supporters were rallying around him on the basis that the rape allegation‚ which surfaced at the weekend‚ was part of a plan to remove him to weaken president Cyril Ramaphosa.

It was also seen as retaliation over the sexual harassment allegation levelled against Mabe.

Mabe said on Tuesday his accuser then embarked on a “door-to-door to various media houses” to express her displeasure.

“It is understandable for a matter such as this to attract media attention because sexual harassment is a serious matter and leaders are expected to be exemplary at all times.”

He added: “I wish to reiterate that I respect‚ preserve and uphold the rights of women and have never sexually harassed anyone in my entire life.”

Mabe said he advocates for press freedom “especially in our country where some amongst us are ‘newsroom agents’ and probably conduct teleconferences with news desks before diary meetings – a hard reality”.
/mj
– TimesLIVE