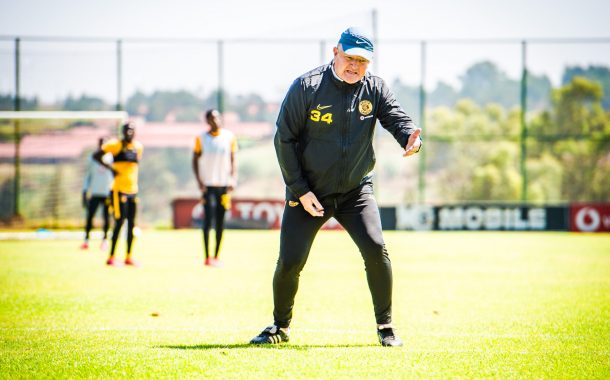 Kaizer Chiefs coach Gavin Hunt has a good idea what to expect from his team’s Caf Champions League Group C opponents Horoya at FNB Stadium on Tuesday night (kickoff 6pm) as he met the Guinean team as recently as the 2019-20 Confederation Cup.

Now-defunct Bidvest Wits‚ from whom Hunt joined Chiefs in the 2020-21 preseason‚ drew 0-0 against Horoya at Bidvest Stadium in December 2019 in the Confed group stages‚ and lost 2-1 in Conakry in January 2020.

Hunt said he does not expect Horoya to have changed a great deal from the combination he came across just over a year ago‚ apart from the retirement of much-travelled big ex-Chippa United striker Aristide Bance.

Hunt was asked if that can be an advantage in his analysis of Chiefs’ opponents.

“A little bit yes and no – I mean obviously Bance is not playing‚ I think he’s retired‚” the coach responded.

“But I think the framework of the team is still pretty much similar to what we played against last year. They will be tough. They came here and did well against us [Wits] here and we obviously lost to them there.

“I think this will be a different game. But they haven’t changed much‚ obviously. All that’s changed is obviously I’ve changed [teams]. But we’ll worry about that on the night.”

The match against Horoya will be Chiefs’ Group C opener after the fun and games of their match-up against Wydad Casablanca on February 13 being postponed‚ with a venue and date of Burkina Faso on February 28 finally arrived at for that game by the Confederation of African Football (Caf).

For Chiefs‚ the preliminary-round victories they enjoyed against PWD Bamenda of Cameroon and Primeiro da Agosto (both 1-0 on aggregate) in November and December appeared to play a part in a good January domestically‚ where‚ after a dismal start‚ Amakhosi won three and drew two in the DStv Premiership.

With his team again off the boil having gone six league and cup matches without a win‚ Hunt will look to the Champions League to again spark some form for his battling combination.

“In December last year we got the two good results against the Cameroonian and the Angolan sides‚ into January. And ja‚ I felt it did help us a bit‚” Hunt said.

“We had a look at one or two other players and it certainly helped us in a few of those games that we played where we won a few games in a row. And hopefully that situation can help kickstart us again.”

In the 2018 Champions League a 2-2 draw away in Guinea‚ and 0-0 in SA‚ were a big part of Mamelodi Sundowns failing to progress past the group stage.

In the 2018-19 Champions League a 2-1 defeat of Orlando Pirates in the final group stage game also blocked Bucs’ progression.