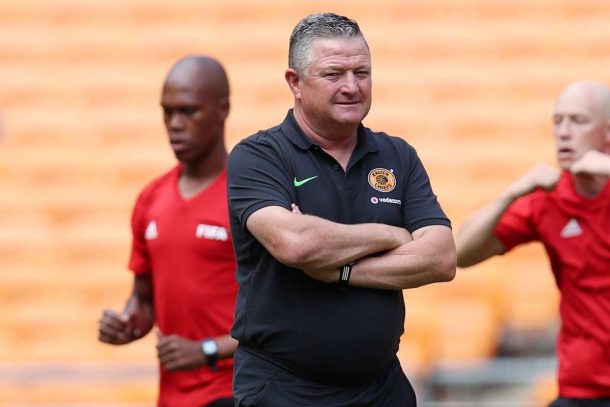 Kaizer Chiefs coach Gavin Hunt had no doubts following his team’s 2-1 Soweto derby defeat to Orlando on Saturday‚ expressing in no uncertain terms that he felt Amakhosi “should have won the game”.

Chiefs missed a penalty by Samir Nurkovic‚ and some good chances in the opening half-hour‚ and last 10 minutes‚ of the DStv Premiership match-up at Orlando Stadium but ultimately paid for individual errors at the crucial front and back ends of the field.

It was Chiefs’ third derby defeat in succession‚ and third in all Hunt’s clashes against Pirates‚ having previously lost in both legs (3-0 and 2-0) of this season’s MTN8 semifinals.

“I’m disappointed. We should have won the game. We had more than enough chances to win the game‚ we were very unfortunate to lose the game‚” Hunt said afterwards.

“But that’s sometimes‚ you know … football doesn’t always go for you. We had many‚ many chances and thought we did very well today.”

Hunt‚ often an emotionally low figure after a defeat‚ was gruff and verging on sarcastic in his sometimes one-line answers in the post-match press conference – a not unfamiliar trait from the coach after a loss.

“No‚ it’s a step forward‚” was his response to a question on asking if the match was a step backwards for his team.

“Points-wise‚ morale-wise‚ things like that. So we need to get them up again‚ and go again. And we will go again.”

Chiefs‚ who lost their first game in six‚ did have a number of chances in the opening half-hour as they dominated the first half. They spurned those‚ with some poor attempts off target.

Their poor finishing was one of the aspects that cost Amakhosi the game‚ along with some defensive errors‚ and other individual errors including a saw a weak penalty by Nurkovic saved by Bucs keeper Richard Ofori in the second half‚ and Siyabonga Ngezana missing an open goal on the rebound from that.

Pirates’ 38th-minute opener by Thembinkosi Lorch came from a defensive error by Reeve Frosler‚ a header skewing backwards to allow the Pirates man through on goal. Goalkeeper Daniel Akpeyi‚ coming off his line‚ could have dealt with the stop better.

Nurkovic’s missed penalty soon after the restart was an opportunity spurned to draw level early‚ and leave time to push for the win. Pirates started to edge into the game from there‚ and ultimately their second scored by Siphesihle Ndlovu in the 80th‚ after fellow substitute Paseka Mako too easily skipped past Frosler’s challenge‚ was deserved.

Bucs had also had a penalty appeal incorrectly turned down when Njabulo Blom tugged down Vincent Pule with 20 minutes to go.

So Chiefs did manage to create a number of chances‚ and dominate phases of the game‚ including the last 10 minutes after Bucs’ second where Daniel Cardoso pulled one back in the 84th.

In the end‚ though‚ their sloppiness‚ not enough of those chances hitting the target‚ and individual errors were costly‚ and Bucs also justifiably had aspects of the match‚ including the unsuccessful penalty appeal‚ to complain about.