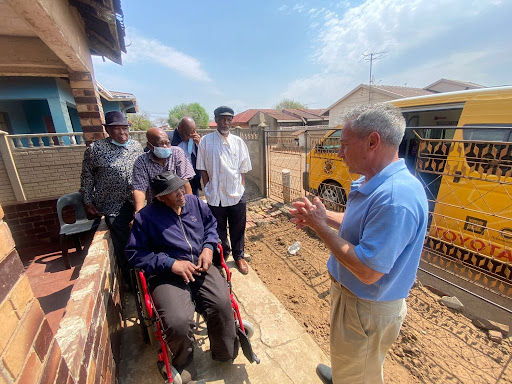 When a group of 1970s Kaizer Chiefs legends and the club heard a comrade‚ the famously grizzly ex-central defensive stalwart Simon “Bull” Lehoko‚ was in need. they did not hesitate to come together and to his aid.

The now 70-year-old Lehoko had a leg amputated in 2016‚ apparently from complications after a brick fell on it‚ and diabetes. As Covid-19 has ravaged SA economically‚ a group of Chiefs legends heard on social media Lehoko had hit hard times‚ and his wheelchair had fallen into disrepair.

Stylianou said the wheelchair and Chiefs merchandise delivered were ]a start and the “club and legends have assessed Bull’s position and a visit is planned in the near future‚ looking at renovations to make his house wheelchair-friendly”.

He said: “After meeting Bull‚ ‘Bra Kai’ [Chiefs chairman Kaizer Motaung] met the legends in the boardroom and thanked them‚ and future meetings were planned over legends facing future issues. Cecil will chair the meetings‚ looking at all possible ways to make the legends comfortable in times of any difficult situation.

“A lot of legends are struggling financially‚” Stylianou said.

“A lot of them‚ and I’m also talking about AmaZulu‚ Pubs‚ Orlando Pirates‚ Swallows. They never got themselves prepared for life post-football.

“It was not their fault. No-one told them. You need someone to tell you when you’re young. You can’t just guess how this world functions. They also made nowhere near the same kind of money from the game. Even the financial advisors of 30‚ 40 years ago got it wrong saying‚ ‘Invest in a pension‚ and when you retire you’ll earn R2‚000 a month’. In the 1970s you could buy car for R700 and you thought‚ ‘R2‚000 a month‚ what a lot of money’.”

Stylianou said Motaung is always available to help when he hears a club legend is in trouble‚ a more difficult task as each decade the number of former players grows.

“But he doesn’t blow his trumpet and say‚ ‘Look at what I’ve done’. He keeps quiet. He’s very secretive‚” the retired businessman said.

“When a legend passes on‚ Chiefs basically cover all the costs of the funeral. Kaizer has never forgotten the legends who built the Chiefs brand. People forget Kaizer himself is a legend‚ and these are his former teammates‚ and he looks after them.”

Cecil Motaung‚ chairman Motaung’s brother and also Chiefs’ supporter relations manager‚ has been a bridge between the club and its legends.

“The difficulty is you can’t pick up a phone every week and know who is struggling‚‚” he said.

“With Covid-19 we hadn’t been able to mix‚ so the legends had basically been out of touch for about two years. We’d heard some things about Bull needing help. [The late] Ryder [Mofokeng] kept updating us.

“Someone took Bull’s wheelchair to an engineering company. They tried to put it together but it wasn’t successful. They took a photograph of it in pieces and put it on Facebook. The minute I saw that‚ I felt it was wrong. It looked like Chiefs and the legends weren’t doing anything.

“I immediately posted on Facebook that it had been brought to our attention that Bull was having a difficult time‚ and most important that we would come to his aid.

“I went around and found a wheelchair that was strong. Some people on Facebook asked why we didn’t get him an electric wheelchair‚ but I replied: ‘People state we must get you a Ferrari‚ but we got you a 4×4’. He’s an athletic guy and wants to get ]exercise and use his muscles.

“Helping a legend comes from the many years of being together. The love and respect and the relationship has grown tremendously.

“Chiefs in the 1970s were so solid. You couldn’t separate us. We’d go into the change room and discuss a few things‚ get back on the field. No-one felt inferior or superior‚ like ‘Ace’ [Ntsoelengoe] being the best player‚ or anyone saying‚ ‘Lucky you should have done this’‚ or ‘Ryder you should have done this’. Even today‚ in the fifth decade‚ you can’t separate us.”

Stylianou said there was a special bond between the players of the 1970s‚ when Chiefs‚ formed in the first year of that decade‚ were a new and magical overnight phenomenon that captured the football-loving public’s imagination.

“When I joined Chiefs‚ at my first training session Ryder grabbed me by the hand and introduced me to all the players. That’s a very African expression of friendship‚” Stylianou said.

“The squads in those days were 16 — two goalkeepers and 14 outfield players‚ because you weren’t allowed two substitutes. When we sat in a change room we all fitted. We did everything together. Now Chiefs have squads of 37 players. How do you bond the same way?

“Shaka Ngcobo and I became room-mates. It was a special time. The understanding the love and respect was spot on.”