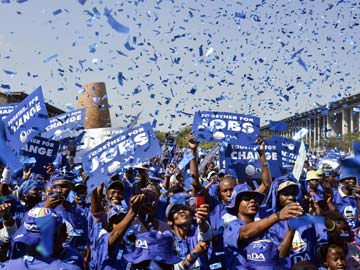 Three ANC-run metropolitan municipalities in Gauteng and one in the Eastern Cape had cost the country close to R20 billion in irregular and wasteful expenditure in the past five years‚ compared to the R20 million incurred by the DA-run Cape Town metro.

This statement was made by mayoral candidates of the Democratic Alliance from Nelson Mandela Bay‚ the City of Johannesburg‚ the City of Tshwane and Ekurhuleni.

The DA candidates outlined a number of interventions they would make should the DA win the metros.

These include a ban on councillors and their family members doing business with the municipalities‚ and opening of all tender processes at bid adjudication process to the public to ensure transparency.

The DA also promised to target a 99% debt collection for services‚ filling up of critical posts immediately and implementing accurate and fair billing for all residents.

The party also wants to restructure the bloated administration and employ people suitable for the role.

The DA also wants to prioritise the transfer of title deeds.

“When you give the public their title deeds‚ you give them pride and leverage to raise money‚” DA mayoral candidate for Tshwane Solly Msimanga said.

Other plans outlined by the DA is to increase the repair‚ maintenance and refurbishment budgets of municipalities instead of replacing infrastructure at a greater cost.

“The ANC waits for something to break before fixing it‚” Msimanga said.

Other candidates who were present were Herman Mashaba for Johannesburg‚ Ghaleb Cachalia for Ekurhuleni and Athol Trollip for Nelson Mandela Bay.