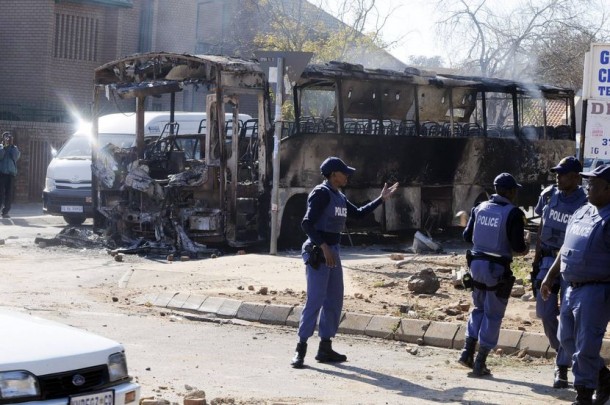 The Hawks are investigating whether senior African National Congress members in Tshwane are behind the wave of civil unrest in the capital city.

“I can confirm that arrests will be made soon of people implicated. Our investigations are at an advanced stage and we have names of people who allegedly orchestrated the violence‚” said Hawks spokesman Hangani Mulaudzi.

ANC secretary general Gwede Mantashe told ENCA that the party had names and pictures of members of the party who held a meeting to disrupt Tshwane after the party announced that former cabinet minister Thoko Didiza was its mayoral candidate for the city.

The hunt for the alleged instigators of the protests – which saw two people killed overnight‚ at least 20 busses torched‚ businesses looted and roads barricaded — gathered speed on Wednesday as details emerged of an allegedly clandestine meeting at a hotel where a plot was allegedly hatched on Monday to render the city ungovernable.

The Pretoria News reported that the meeting was chaired by a senior ANC official and attended by branch leaders and ward councillors who were opposed to the appointment of Didiza.

Minister of State Security David Mahlobo also hinted in a radio interview that the party had information that the protests were sparked by disgruntled ANC members.

The ANC Youth League earlier placed the blame for the upheavals on the door step of the current mayor and regional chairperson Kgosientso Ramokgopa.

Cosatu joined the hunt after reports about the meeting at Court Classique Hotel in Arcadia.

Cosatu spokesman Sizwe Pamla said the federation was concerned about the alleged involvement of “leaders of the movement in collusion with tenderpreneurs” in the violent protests.

“The movement needs to cleanse itself of reactionaries‚ opportunists’ flatterers‚ patrons‚ factionalists and hangers-on‚ who are infiltrating and tearing the movement apart.

“This narrow focus on internal factional battles by the movement and the never-ending scandals‚ political violence and killings risk; not only weakening the movement but killing it and its political capacity to lead society‚” said Pamla.

ANC spokesman in Tshwane Teboho Joala challenged anyone with information about any clandestine meetings related to the protests to come forward and report details to the police.

IS IT POLITICS‚ OR IS IT MONEY?

Was it politics or money responsible for the ongoing chaos and looting? That’s been one of the burning questions in the city over the past three days.

Despite politics being the spark that caused the protests‚ the level of looting raised serious concern for government‚ police and the ruling party.

In the last 24 hours‚ looting and damage of property was the order of the day in Mamelodi‚ Atteridgeville‚ Mabopane and Hammanskraal.

Everything in the shops was stripped. Cables‚ bulbs and crates were taken. Shop owners were left with no choice but to take their stock and flee.

“Let them go and never come back again. We do not want them here‚” said one of the looters as she snatched a light bulb.

Police struggled to contain the sporadic incidents of looting around Mamelodi.

When most shops had been looted‚ the mob then moved to the Menlyn Mall but were stopped in their tracks by police. The mall was immediately closed and police remained inside. Protesters refused to leave the area outside the mall along Solomon Mahlangu street‚ but by mid-afternoon the situation had been calmed.

“There is no way this can be about Sputla. These people just want to loot the business in this area. They are using the protest as an opportunity‚” said one of the police officers in Mamelodi.

Police confirmed that two people had been killed overnight in Mameloi‚ without providing details.

In Mamelodi East‚ a different economic activity took place. About 20 buses had been set alight the before. As the charred remains lay on the street‚ residents stripped what was left to sell as scrap metal.

“My brother‚ this is business for us‚” said one man who claimed to have already earned R2‚000 from the scrap.