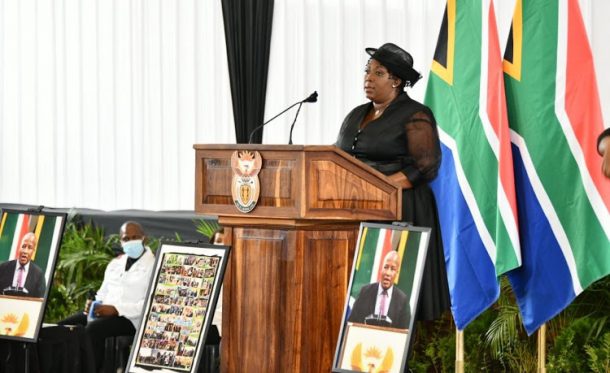 Mpumalanga premier Refilwe Mtsweni-Tsipane made headlines this week after she was spotted without a mask during the funeral of minister in the presidency Jackson Mthembu on Sunday.

Mtsweni-Tsipane has been criticised by the public and politicians over the incident.

Here’s a wrap of what has happened:

The office of the premier issued an apology on Sunday and said Mtsweni-Tsipane was only without a mask for a “brief moment.” It said she had her mask on when she entered the cemetery but “it somehow got damaged and fell”. Her team gave her another mask to use for the rest of the funeral proceedings.

She urged the public to adhere to the regulations and always wear masks.

Police minister Bheki Cele roped in police commissioner Khehla Sitole to investigate the circumstances around the premier’s conduct. He reminded South Africans that wearing masks is necessary for the fight against the virus.

Cele said necessary action would be taken once the investigation had been concluded.

Thuli Madonsela: Police must issue a warning before arrests

As calls for the premier’s arrest gained momentum‚ former public protector Thuli Madonsela said it is possible to forget to wear a mask when “deep in thought” and further clarified the law‚ saying police cannot arrest people for flouting Covid-19 regulations without first issuing a warning.

She questioned why the premier was not warned and her team had not alerted her to the offence.

“The offence lies in refusing to obey an instruction to wear a mask. That said‚ this is an important lesson about all of us doing the right thing because it’s the right thing to do and being each other’s keepers. The key to triumphing against Covid-19 is behaviour modification‚” she added.

He said Mtsweni-Tsipane’s behaviour was an insult to the late minister’s legacy‚ especially as Mthembu had been at the forefront in the fight against Covid-19.

“For someone to actually parade the opposite with regards wearing masks at his solemn send-off was an insult to his memory. The news today is not about celebrating the life of Jackson‚ they are talking about this avoidable incident‚” said Kodwa.

The premier admitted that she “should have known better as a public figure”‚ in an apology issued on Monday.

“To this effect‚ I have deposited a statement of guilt at the Vosman police station in Emalahleni and where I accepted the necessary fine.

“To further demonstrate my remorse‚ I have bought 1‚000 masks that will be distributed in Emalahleni as part of public education and awareness campaigns to demonstrate the serious nature of Covid-19‚” she said.