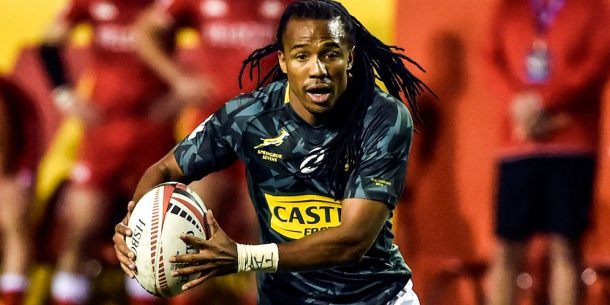 South Africa’s highest points scorer reached a mutual agreement with the Springboks Sevens management and he bows out after 345 Sevens Series matches and a points’ tally of 1462.

Afrika’s national contract comes to an end in July and with no international matches or tournaments scheduled due to the Covid-19 pandemic‚ Springbok Sevens coach Neil Powell has confirmed his departure.

“It is one of those inevitable things in professional sport‚ but even so‚ it remains a sad day to say goodbye to Cecil when his contract expires‚” said Powell.

“He has been a great in the game‚ his achievements speak for themselves and he inspired many to enjoy the game of sevens.

“I played with Cecil when he made his debut in 2009 and in the last couple of years‚ and had the privilege of coaching him as well.

“He was a truly gifted player who came back from some serious injuries more than once to achieve amazing feats as a player and squad member.

“We will say goodbye to him in a more formal way later in the year‚ but for now the Springbok Sevens management would like to thank him for his contributions over the many years he has been with the Blitzboks.

“Cecil has set very high standards for those to follow and there is no doubt that he will leave the jersey in a better place‚ something every international rugby player strives for.”

The postponement of the Summer Olympic Games in Tokyo to next year dealt Afrika a cruel blow‚ but he hopes to appear in Japan in some capacity.

“The Covid-19 pandemic we are currently facing is definitely not something anyone wished for and was certainly not expected. As much as it has re-arranged and possibly unsettled my Olympic 2020 chances‚ it is a dream deferred and not cancelled‚” said Afrika.

“As the management has mentioned‚ the possibility remains should the opportunity to play in the Olympics present itself. I am always ready to play should the Blitzboks need me.

“Aside from keeping-up my professional fitness to stay prepared for opportunities that may avail themselves‚ I also plan to be more involved in skills training within rugby and overall sports development initiatives.

“I believe I can definitely add value from my experience and I would love to be a part of that‚ not only as a player on the field but also on the other side of the white lines‚ as I have rather a great passion for contributing to the components related to the game in other forms such as analysis and coaching.

“Presently‚ I am also using some time to partake in relief projects for those affected by the Covid-19 pandemic as I believe that this is one of the most important aspects in our lives at the moment and requires all hands-on deck‚ the government cannot do it alone.”

Powell said they agreed a year ago that Afrika would make his swansong in 2020 but that option has fallen away.

“We extended his contract last year in order for him to have a shot at making the Olympic squad‚ but with that being postponed to next year‚ that option cruelly fell away and is not available anymore.

“We have proper post career guidance in place for all in the squad and I know Cecil is already dipping into the business world‚ where he will be successful‚ no doubt.”