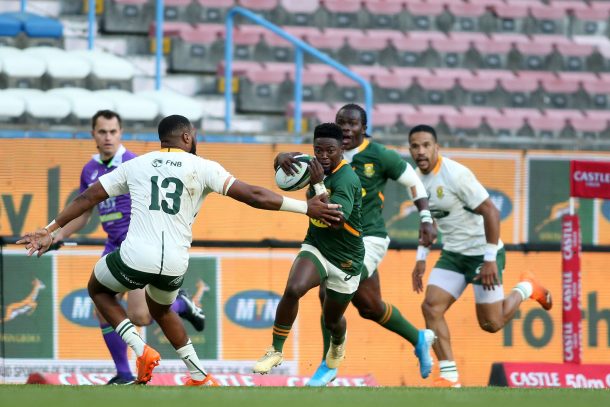 Five takeaways from the Springbok Showdown

The Springbok Showdown at Newlands on Saturday attracted equal praise and criticism.

Praise in that it provided a showroom floor for players who haven’t been given an opportunity because of Covid-19.

Criticism came in the form of the tactical direction the game took and the use of Springbok jerseys.

However‚ there were good and bad things that shaped the game that’ll have to be looked out for when Super Rugby Unlocked starts on Friday.

Here are some of them:

Herschel Jantjies and Sanele Nohamba gave South Africa a glimpse of the health of SA’s scrumhalf stocks.
Nohamba was a livewire who delivered all of his basics with aplomb while Jantjies looked more and more like a South African version of Aaron Smith. It’s also worth remembering that both half-backs have stiff internal competition‚ which can only make them better when they compete for the national team slots.

2) The props are in rude health

Ox Nche has the responsibility of letting the nation in on the secret to his rapid improvement while at the Sharks. The potential has always been there‚ but the excellence shone through in an almighty battle against Carlu Sadie. The latter was excellent and staked a claim ahead of more experienced team-mate Ruan Dreyer. Steven Kitshoff was a man among boys with his scrumming‚ but that department is sorted for the interim.

3) Damian Willemse needs to be comfortable in his own skin

Willemse finds himself at a difficult station where he knows how good he is‚ but needs to find the right time and place to display his talents. Sometimes‚ keeping it simple to fit a specific situation works best and once he gets to understand this‚ he should be good to go. He tried too hard and it showed. SA has got a number of flyhalf cabs at the rank‚ they’re close from an age perspective and they’re talented. Willemse’s one of them and he must try his best not to get left behind.

4) The individual coaching flair was needed

While the exercise was there to imbue players in the Springbok culture‚ the need for Mzwandile Stick and Deon Davids to show their coaching hand was there and needed to be taken. Bok patterns are well-known‚ but seeing how the brains in the department view the game and how they want it to be played could’ve given SA a better insight into their thinking. There was a lot at stake in the game‚ understandably so‚ but their creative thinking should have been allowed to permeate through in the game.

The Stormers style of play may not suit him‚ but in Gelant‚ there’s an ambidextrous 15 who can play at 10 and 12. His appreciation of time and space and his distribution is critical. As a second-playmaker‚ he’s becoming unmatched and the key now is to see how the Stormers get the best out of him. With Aphelele Fassi injured‚ there’s one less person to compete with‚ but there’s a player there for the Stormers and the national team.