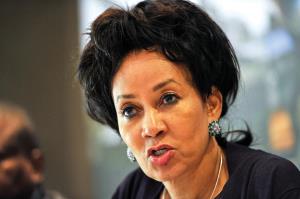 The government is considering resorting to biometric technology to fight RDP housing fraud.

Human Settlements Minister Lindiwe Sisulu said her department may use the technology to stop people from reapplying for government’s low-cost housing scheme when they have previously benefited from the programme.

Speaking to Sowetan on the sidelines of the Habitat III conference in Hatfield, Pretoria, Sisulu said the system, which has worked in India, could be used as the government was centralising the RDP housing beneficiary list.

“I’m part of the board of Slum Dwellers International (SDI). They have found that to fight the problem, in India they introduced biometrics. We’ll look at the system and find ways to see if it can work for us.”

Biometrics is computerised security technology in which physical characteristics, especially of the face such as the eyes, are analytically used to detect a person’s authenticity.

This means that if the system is adopted, RDP houses applicants will have to be entered into a system that will in future be able to detect if the applicant has already benefited from the programme.

Sisulu said the problem where people benefited from the state housing scheme and sold the houses was not unique to South Africa.

A Kenyan representative told the conference that a similar practice was discovered and its causes were identified as poverty.

“This is a universal problem. When you give a house you give dignity. There’s a law that prohibits people from selling a house until they have stayed in it for eight years. If you sell you have to get permission from government. When you sell it after eight years the value could have doubled or tripled. Our people don’t know that. There is great value in owning the house.

“We need to tighten our laws on people getting houses and selling them. When given a house, you will get a letter that you will sign. When they sell it, they will know they had broken a contract,” she said.

She said the housing backlog was currently at 1.8million.

Though she did not regard it as failure, Sisulu admitted that the country has not been able to meet its target on the informal settlement eradication programme as set out in the Millennium Development Goals.

Under then president Thabo Mbeki , South Africa was a signatory to the project during the 2005 African Ministers’ Conference on Human Settlements and Urban Development to do away with slums in the cities by 2014.

“Mbeki signed. We believed that 2014 was our target. Targets are necessary tools to measure progress. Other countries such as Algeria put a target and has eradicated informal settlements. It is not a death sentence, pass or failure. It’s a UN project.