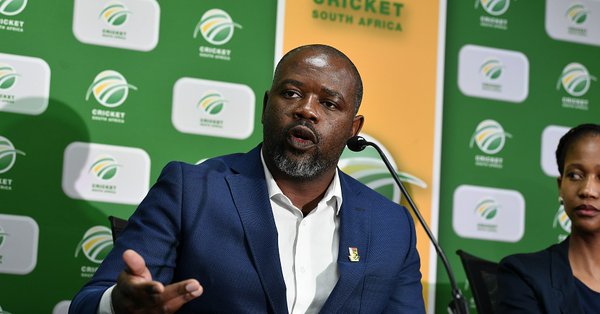 Erstwhile Cricket South Africa (CSA) CEO Thabang Moroe has confirmed he has made a submission and will testify at the organisation’s transformation inquiry hearings.

Moroe played cricket for Gauteng from a young age and eventually ended up in administration.

He went on to rise through the ranks to become provincial president Gauteng Cricket Board‚ which is now called Central Gauteng Lions in 2014‚ and his star continued to rise from thereon.

Two years later in 2016‚ Moroe was elected CSA vice-president and a year later in September of 2017‚ was appointed as acting CEO at a young age of 34.

Moroe was given the CEO’s job on a full time basis‚ on a three-year contract‚ in July 2018.

He was suspended in December 2019 after allegations of misconduct.

Moroe’s disciplinary hearing only started five months after his paid suspension and he was subsequently dismissed in August last year.

Moroe has never personally spoken to the media since his suspension but on Tuesday‚ during Robert Marawa’s Marawa Sport Worldwide show‚ the former CSA boss called in.

Marawa was talking to former Gauteng cricketer Sonnyboy Letshela when Moroe phoned in.

Letshela‚ who played for Soweto for a decade before securing a contract with Gauteng in the late 90s‚ was reliving the racism and discrimination he faced during his playing days when Moroe called.

Letshela was telling Marawa of the story of how he tried to commit suicide while playing in England as a result of the Tendulkar saga.

“What Sonnyboy is saying is true in terms of how he was treated in cricket‚” Moroe said on the daily SABC radio sports show which is simulcast on Metro FM and Radio 2000 from 6 to 7.30pm.

“I was his junior and we grew up witnessing such treatment of our people and when we got into higher positions we also got treated the same way.

“Having grown in cricket all the way to the most senior office of cricket‚ I saw how systematic it has become.”

Moroe spoke about how black African players’ bowling actions‚ behaviour and temperament will be called into question just before announcements of Proteas World Cup squads.

“I can tell you about the experiences that I have witnessed in Sonnyboy’s case‚ who was literally worked out of cricket‚” Moroe said.

“I thought that Sonnyboy‚ straight out of high school‚ will walk straight into the national team. But I mean‚ even making the provincial team‚ was that much tougher for him.”

Moroe said he will tell all during his testimony‚ including a period where he said there were people who opposed Kagiso Rabada’s inclusion in the Proteas squad as teenager.

“There are things that the public does not know‚ the fact that we had to fight for Kagiso Rabada to play.”

Rabada‚ who is now 26‚ made his Proteas debut in 2014 when he was 19 and is currently on tour in Ireland with the national team.

“We were told Kagiso is too young and he needs to be given time to mature. We had to fight for Kagiso to play.

“Today he is a world beater and people carry on like they never at some point tried to block his way‚” Moroe said.

Moroe was then asked if he will appear at the hearings or not.

“Yes‚ you are going to have me at the SJN testifying but not only testifying but also to poke holes in how certain things are being done and obviously to give the truth to the public‚” Moroe said.

Moroe said he will spill the beans‚ including how current CSA director of cricket Graeme Smith was appointed‚ but did not provide the date and time.

“People just know what they have been told by the media. They don’t know the facts of what has happened at CSA.

“They don’t know the facts around the hiring of Graeme Smith.”

The now 35-year-old Moroe said the testimony given by former CSA board member Dr Eugenia Kula-Ameyaw was “the truth”.

Smith’s appointment as CSA director of cricket came under the spotlight last week at the hearings.

“I mean Dr Eugenia Kula-Ameyaw came on your show about a week or so ago‚ and she spoke about the facts of how everything did actually happen‚ which is actually the truth.”

The CSA transformation inquiry hearings were established to investigate racial discrimination within the organisation‚ and to recommend remedial action.

Moroe said he has his doubts that the new CSA majority independent board will fully and willingly implement recommendations and remedial action.

“It would be interesting to see what the new board is going to do about matters that are going to come out.