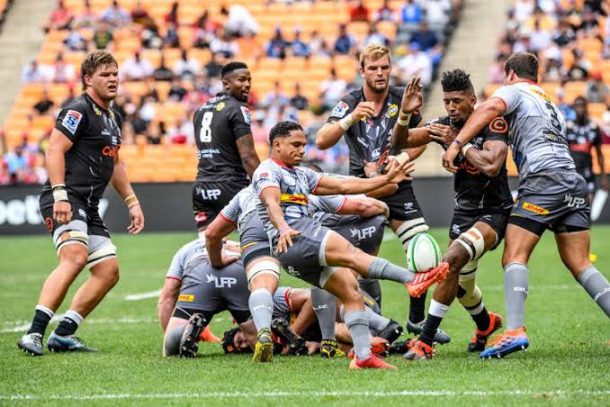 The festive season break did little to douse Makazole Mapimpi’s devotion for dotting down.

Mapimpi‚ who capped a stellar year with some barn storming performances at last year’s Rugby World Cup ran with familiar verve and vigour‚ albeit in a losing cause for the Sharks in the early Super Hero clash here on Sunday.

He dotted down twice inside the first 50 minutes to leave his mark on the game‚ but on the other side Stormers scrumhalf Herschel Jantjies delivered equally telling blows.

There were flashes of brilliance from the familiar suspects but in the end it was the unremitting defence of the Stormers that helped edge the Sharks.

They have the early bragging rights thanks largely to staying in touch in the first half when the Sharks looked to stamp their authority on proceedings.

The Durbanites were in the ascendancy in the set pieces‚ and they gained some traction from the driving maul‚ an area in which the Stormers will want to brush up their defence.

The Stormers pack‚ however‚ increasingly stood their ground as the game wore on‚ while the backline’s opportunistic tendencies helped to deliver telling body blows to the Black Panthers.

The Sharks made the initial inroads‚ eking out valuable territory by battering the gainline. However‚ the deeper they ventured into Stormers territory‚ the greater was the force with which they were met.

It was Springbok magic that got both teams going on the scoreboard. After being on the back foot the Stormers made the most of an attacking line-out when Jantjies caught the defence drifting allowing him to run in completely unmarked.

Five minutes later‚ however‚ what appeared to be a speculative chip by Lukhanyo Am sat up perfectly after the bounce for the speeding Mapimpi who stole the march on the closing defence to score in the corner.

The Sharks created more chances but you have to feel for fullback Aphelele Fassi who dotted down what would have been an early candidate for try of the season. He beat four defenders en route to the tryline but his effort was ruled out due to obstruction.

A second try by Jantjies got the Stormers back in front on the 50-minute mark and the Cape Town side seemed to have the game in the bag when Godlen Masimla scored in the 71st minute.

The game was back in the balance‚ however‚ when Marius Louw’s determined thrust for the line got the team in black back in the contest.

Although the Sharks ran out if time there were many aspects of their game‚ mainly the way they contest for primary possession that would have pleased their coach.