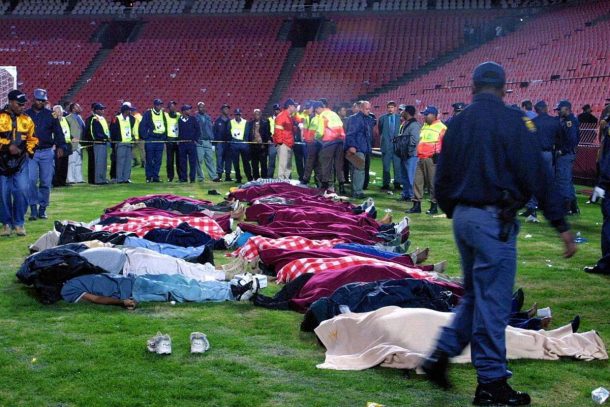 It has been exactly twenty years since 43 supporters were trampled to death and many others injured in a stampede triggered by huge crowds at a league match between traditional rivals Orlando Pirates and Kaizer Chiefs at Ellis Park stadium.

Images of several bodies as they were laid out on the pitch for identification and medical attention remain etched in the memory two decades later and Chiefs boss Kaizer Motaung said April 11‚ 2001 will remain a dark day for South African football.

Motaung said the day had begun with the excitement normally associated with the Soweto derby and no one could have guessed that 43 supporters would lose their lives‚ and many others would be injured when it was all over.

“People had gathered at Ellis Park to come and witness what [was expected to be a] beautiful game of football‚ and the expectations were very high for this game‚” he said.

“It was a beautiful evening and [everything] was going well. The game started and once the game started‚ from where I was seated‚ I could see there was some commotion taking place in one part of the stadium in the corner there‚ which ultimately resulted in the stoppage of the game as security and everybody was called upon to come and attend to the situation.

“There was a stampede that occurred as a result of people coming in‚ forcing their way coming into the stadium. It is very sad that [this] beautiful day turned out to be a very‚ very sad day for some of the families because there were many people who died and many who were injured.

“Those of us who were there will always remember this day because it can never be removed from our memories‚ because of what we saw and what happened. This was a very dark day for South African football.”

That ill-fated Soweto derby was one of the most highly anticipated in a long time as Southern Africa’s most popular sides were in pursuit of the league title.

The match had been hyped to such an extent that the simple act of the Chiefs players walking onto the pitch in matching‚ black Damat Tween suits sent the stadium into the kind of frenzy associated with a goal being scored.

Those who were still outside heard the delirious excitement coming from inside the venue and thought the game had already started‚ sending them into a panic and in a desperate rush to get inside. When the fast-paced match did get underway‚ there were still thousands outside.

Ellis Park roared in appreciative adulation when Nigerian Tony Illodigwe scored the opening goal of the match for Chiefs in the 15th minute‚ and the stadium replicated the acoustics moments later when Benedict Vilakazi equalised for Pirates.

While those who were seated inside absorbed the electric atmosphere‚ the same couldn’t be said for those who were stuck outside and pandemonium ensued as they tried to force their way into the stadium. The chaos resulted in a deadly stampede that left many dead.

Motaung said lessons were learnt after the tragedy and these were applied in subsequent Soweto derbies.

“From the event itself‚ I think as football we have done quite a lot of things‚ we have learnt quite a lot of lessons from this unfortunate occurrence on this fateful day‚” he said.

“A lot of things we had to change and we actually made sure that in future we do not experience an event of this nature [again]. Without going back to the history of what transpired and to the commissions [of Inquiry] thereof‚ I think the lessons learnt from that game have actually accelerated us into ensuring that the lives of the people must be prioritised when we have such such big events.

“And hence up to this day we have not had any event that could have triggered something of this nature. Of course this day belongs to those of us…… the bereaved families and those who got injured. We wish them strength‚ we wish the Almighty to give them strength‚ and those who lost their loved ones to always remember that we are together with them on this day.