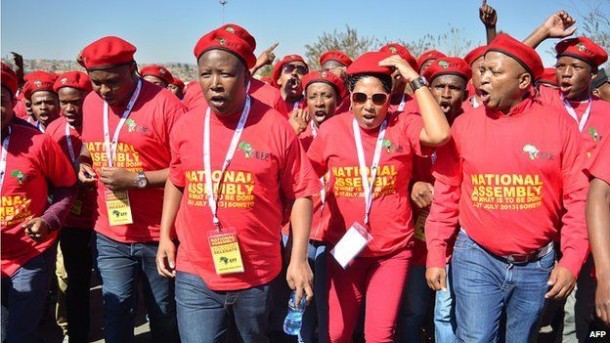 The university said arsonists firebombed a 1‚000 seat auditorium at its Auckland Park campus at around 2am after breaking into the building. Also destroyed were computer laboratories‚ including equipment used for career assessment and guidance‚ the university said in a statement.

“We would like to say the EFF condemns such acts‚ we would also like to condemn the utterances of the UJ SRC president who went on Jacaranda FM today to say the EFF is behind this‚” said EFF UJ students chairperson Tshireletso Mati.

“As the EFF every time we have issues of students or workers we resolve to legal and robust engagement with management… Since the presence of ‘bouncers’ on campus this is the second incident of this nature on our campuses. How is it possible that there were bouncers on campus but they didn’t see or hear anything? The bouncers could be responsible for this..” added Mati.

The university said alternative arrangements were being made due to the use of the facilities for graduation ceremonies and mid-year assessments.

No motive has been given for the attack‚ which follows similar attempted arson attacks at the University of Witwatersrand as well as the gutting of building at North West University’s Mafikeng campus earlier in 2016.

No one was injured in the attack and no arrests had been made yet‚ the university said.

One student said: “I was very shocked when I heard that the auditorium has been burnt. My roommates said they heard on the radio and I had to come here do my assignment so I saw it for myself. It’s bad hey‚ what were the bouncers doing when the auditorium burned like this? We don’t even know who did this or what is happening‚ the university said they will release a statement but they still haven’t said anything”

“We as the SRC did not pinpoint any group of people and say they are responsible for this. We would like the law to take its course and we will wait on results from the investigations‚” he said.

He added that students had issues on campus they would like management to address.

“We have a serious problem with the bouncers which are all over campus. We don’t feel safe but intimidated. We also want the school to clear 12 students they arrested a few weeks ago for protesting before their exams start‚” he said.

The university said those responsible for the fire bomb attack were not UJ students.

The university’s deputy vice chancellor Mpho Letlape told journalists at a media briefing on Monday that he was convinced that outsiders were behind it.

The university’s deputy vice chancellor Mpho Letlape said: “UJ is mandated to empower 52‚000 young people and their families and communities with education‚ skills and the tools to allow them to participate fully in South African economy and we will not allow a miniscule violent minority to destroy the infrastructure necessary for our task.

“We will do everything within our power and in cooperation with the authorities to track these criminals down‚ prosecute them and send them to prison for as long as possible‚” Letlape said.