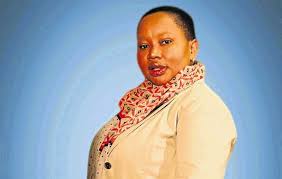 That’s how Lumka Oliphant taunted media to report on her rant in which she warned them to not “talk s*** about” Bathabile Dlamini‚ her boss, whose address at an event in Germiston last week was reported by a newspaper to have left some “wondering if she was drunk”.

“The minister reportedly used a microphone stand when standing and sitting down‚” the Citizen reported‚ and quoted observers saying she seemed “unsteady on her feet”.

This prompted an angry response from the ANC Women’s League‚ of which Dlamini is the president‚ demanding a retraction and apology.

“The ANCWL condemns the reports published by the Citizen that the president could not stand during her address and had to address seated due to drunkenness‚” the league’s Meokgo Matuba said.

Oliphant‚ spokesperson to Dlamini in her position as social development minister‚ was less diplomatic.

Announcing her expletive-laden rant‚ she said: “I have decided to take this alcohol matter to the gutter where you have taken it.

“It has also become fashionable that when we talk about what we know about any leader who may be unpopular‚ we are accused of dancing for our food. So today‚ allow me to dance for my food.

“Above all allow me to be vulgar.”

Oliphant said that‚ if it were up to Dlamini‚ “South Africa would not be drinking‚ there would be no advertising”.

She also said that people can “say whatever you want to say on her politics when you do not agree with her”‚ but added‚ “don’t talk s*** about her”.

Dlamini made headlines last year the Democratic Alliance said the “Minister of ‘Smallanyana Skeletons’ is determined to keep her skeletons firmly locked up in the cupboard”.

This was a reference to Dlamini “deliberately vague responses” in Parliament to questions about her overseas travel and “stays at the Oyster Box Hotel”.

“Specifically‚ minister Dlamini‚ in her reply to a DA parliamentary question‚ only accounts for R1.6-million spent on travel‚ which we contend is wholly misleading‚ considering that the latest annual report pitches her travel at R12-million‚” said the party’s Linda Wilson at the time.