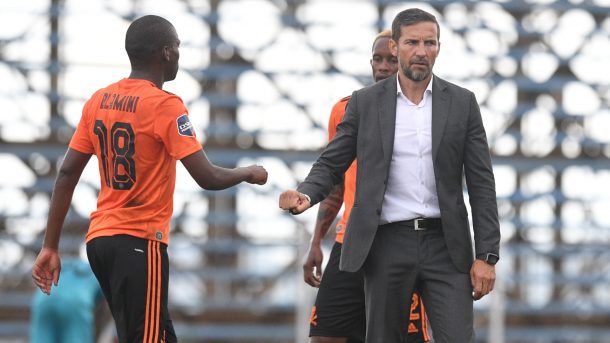 Orlando Pirates have a short and tricky turnaround time to lick their wounds following their defeat to Black Leopards and prepare for combat at home against high-flying Lamontville Golden Arrows on Wednesday just days after a topsy-turvy week in Limpopo.

Zinnbauer’s side dished out a sloppy first half performance against Leopards in Thohoyandou on Sunday to suffer a second defeat in four matches.

The Buccaneers were rocked by a five-minute two-goal blitz in the first half in Venda and looked short on confidence and ideas as they went down 2-0 against feisty Leopards.

Pirates coach Zinnbauer bemoaned a disjointed first half performance and said this is where his team lost the match.

“We were not on the field in the first half. We played a little bit but it was not enough to win the game‚” said the German.

“Against a team in the relegation place‚ you need aggressiveness. We had some options in the offence‚ but in the defence we were not aggressive.

“The transition was too slow. My feeling was that the players thought it was going to be easy here and this is not possible.”

The defeat to Leopards came just four days after Pirates thrashed fellow struggling Limpopo side Tshakhuma Tsha Madzivhandila 3-0 at the same venue. The setback means the Bucs missed out on an opportunity to rein in joint-frontrunners Mamelodi Sundowns and Swallows FC’s lead to five points.

Pirates were hoping to return to Johannesburg with maximum six points in the bag from Thohoyandou but it was not to be and they will find the going tough at home against a sharp Golden Arrows side after their taxing stay in Limpopo.

“We have to work now on [keeping] the heads [of the players] up and prepare the guys for Wednesday.

“It is also a big game for us [against Arrows]‚ same area like us at the moment on the table and you have to win three points‚” said the German coach.

Arrows are one of the only three unbeaten teams in the Premiership‚ the others being joint-leaders Sundowns and Swallows‚ and sit in fourth place on 18 points from 10 matches.

Stuttering Pirates are in fifth position on 17 points from 11 encounters ahead of the showdown against Arrows in Soweto.

Pirates have had an inconsistent start to the new year as they collected just four points out of a possible 12.

Zinnbauer said the match against Arrows is a must-win if his team are to climb up the Premiership ladder.