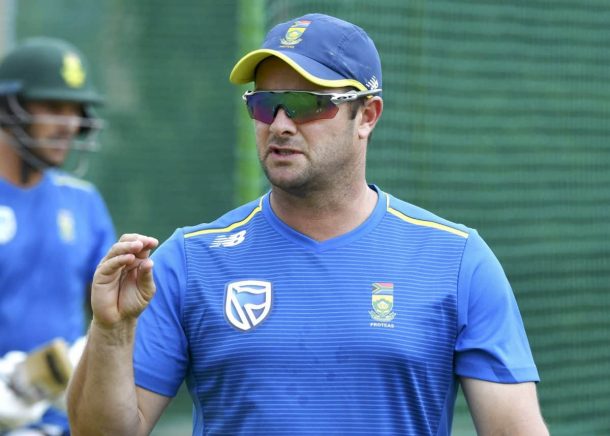 Head coach Mark Boucher has taken responsibility for South Africa’s batting frailties in Port Elizabeth and will search for ways to try and remedy the situation.

The Proteas stumbled to 102 for six in their follow-on innings against England at St George’s Park on Sunday and still need an unlikely 188 runs to make England bat again on the final day on the third Test on Monday.

With Vernon Philander (13) and Keshav Maharaj (5) at the crease and only the remaining bowlers to come‚ South Africa look set to suffer a heavy innings defeat unless rain intervenes for the majority of the day.

That looked unlikely two hour before the start of play.

A defeat will see SA go 2-1 down in the four-match series.

Boucher said his team’s performance was just not good enough‚ adding that they had mental problems in trying to cope with part-time spinner Joe Root’s turning deliveries.

The English captain took four for 31 with his gentle offies.

“It was very disappointing. But it’s not a time to be pointing fingers. It’s a time to self-reflect‚’ said the former Proteas wicketkeeper.

“I need to look at myself and ultimately I must take responsibility and work out how I can mentally and physically upskill the players in a short space of time.

“I need to find a way. It’s easy to point at the system‚ but there are no excuses‚’ he added.

“Ultimately‚ I’ve got to take responsibility for the performance of the team. How do I‚ mentally and physically‚ upskill these guys in a short period of time to make them better players? That’s what is in my mind presently.”

There have been calls to replace players and Zubayr Hamza could be one of the men to miss out in the final Test in Johannesburg later this week.

The right hander scored two and 10 in his two innings at St George’s and he was exposed against fast‚ short-pitched bowling.

“You don’t have to be a rocket scientist to know that a couple of our batters are under pressure and they know that as well and are working hard at it‚” he said.

“It’s a situation where if there is someone to leave out‚ it won’t mean that we’ve forgotten about him. It might just be a lack of form and confidence. We’re certainly not throwing anyone away at this stage.”

Under fire Proteas captain Faf du Plessis spent over two hours at the crease on Sunday in scoring 36‚ his highest score in eight innings.

“For me his state of mind is going to be a lot better if he gets out there and scores runs. We all know that he is under pressure in the media and from a confidence point of view‚” Boucher said of his captain.

“The positive for me is that he actually got out there and gave himself a chance to have a look at the conditions and it looked like he had some good rhythm.”

Play gets under way at 10am on Monday.