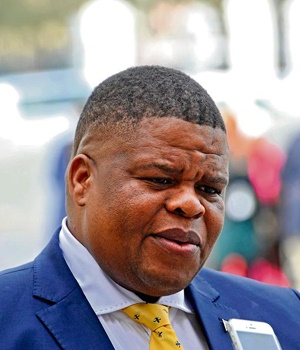 State Security Minister David Mahlobo did visit Guan Jiang Guang’s massage parlour‚ but “he had no idea as to what Mr Guang was involved in”.

This comes after the airing of an Al Jazeera’s documentary‚ called The Poachers Pipeline‚ which reported that a “rhino horn trafficker bragged to Al Jazeera about his close connections to Minister of State Security David Mahlobo‚ who runs the country’s intelligence services”.

It quotes Guang as saying: “He came to my massage parlour every week or at least twice a month. I know him very well.”

According to the Al Jazeera’s website: “The investigation raises serious questions about the involvement of a South African government minister and members of a Chinese presidential delegation in the illegal rhino horn trade.”

On Sunday night‚ a statement from Mahlobo’s office described the allegations against him as “unfounded and slanderous”.

It said the documentary “purports a linkage and the involvement of minister Mahlobo in the illegal rhino horn trade” through his “visits to the local Mbombela Spa owned by a self-confessed criminal Guan Jiang Guang”.

“At the time minister Mahlobo visited the spa he had no idea as to what Mr Guang was involved in‚” it added.

The statement said Guang’s claims of “some sort of friendship” with Mahlobo “is not true” and the minister “has never visited him at his residence”.

“The photo that appeared on Al Jazeera and in the Sunday papers is a photo taken when the minister was being treated at a manicure table and Guang requested a photo to be taken. This is clear from the photo itself.”

The statement quoted Mahlobo as saying his “comrades‚ friends and high-profile personalities visit the Mbombela spa‚ (and) take photos with Guang’s family and some of his staff”.

“Are these individuals now also involved on the illegal rhino trade? People drop names of high profile individuals and take photos — does this mean friendship or connection? I don’t think so‚” Mahlobo added.

“It is extremely reckless and mischievous for an internationally renowned broadcaster like Al Jazeera to be broadcasting such misleading content despite our response‚” said Mahlobo.

Mahlobo “has initiated the following remedial actions to deal with some of the alarming claims made in the documentary”:

– Requested that Mpumalanga Police Commissioner to immediately investigate all allegations made against him in the documentary;

– Requested that the commissioner take action against Guan for illegal rhino poaching activity; and

– Requested the commissioner to additionally look into claims by Guan that he employs illegal immigrants and circumvents immigration laws.