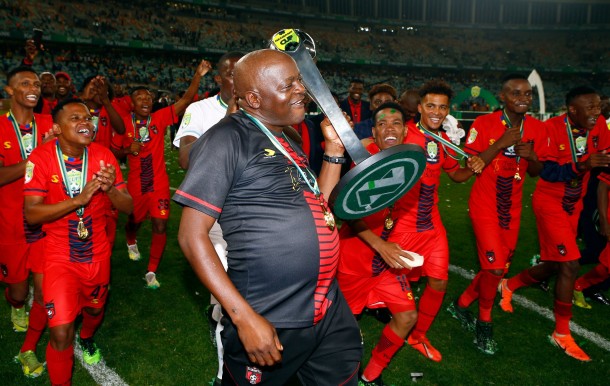 Dan ‘Dance’ Malesela has questioned why he is not given the respect he deserves after the contribution he’s made in South African football over the years.

The 53-year-old Johannesburg-born coach has been in and out of the Absa premiership over the years‚ mainly with Chippa United‚ and has never been given enough time implement his plans.

He was sacked by Chippa after only three games this season before joining TS Galaxy in the National First Division.

Malesela’s 10-month-old Galaxy – a team full of unknown youngsters – pulled off one of the most stunning upsets in the local game when they beat favourites Kaizer Chiefs 1-0 to win the Nedbank Cup‚ and the accompanying R7-million cheque‚ on Saturday.

Galaxy also booked a place in next year’s CAF Confederation Cup after striker Zakhele Lepasa scored a last-gasp 90th minute goal to stun the 13-time winners of this cup and their over 50 000 fans that packed Mabhida on Saturday.

Malesela said the victory proved that local coaches are capable of delivering the results if they are given the support‚ confidence and patience that local soccer bosses usually reserve for foreign mentors.

“One of the assets I equip myself with is to have solutions‚” said Malesela as he explained his philosophy.

“For every problem‚ I think of a solution… My mind is just trained like that. If you tell me about the earth doing this and that‚ yoh‚ I don’t have a plan.

“I like practical things. That’s my job. I like things that I can see and I’ve got solutions for.

“So the clubs have taught me a lot of lessons‚ and realistically so and truly so‚ these (the Nedbank Cup trophy‚ his first as a coach) are the fruits.

“These are the fruits and I’m hoping this is just the beginning of bigger things to come.”

Malesela also pleaded with the local football fraternity to buy into his philosophy‚ adding that nothing would ever change the way he looks at football.

“My saddest moment in football is when people tell me that ‘Dan your teams are playing so well‚ you’re such a great coach’.

“Sometimes I spend six months at home not working‚ not coaching.

“You ask yourself and then you look at another club and you say ‘badlalani labantu (what are these people doing)’.

“They just kick the ball forward and ‘kumnandi (they are happy) and then a header and a goal. Amen!’

“You know‚ there’s no time for people to whistle with their mouths (encouraging and appreciating their team’s moves with the ball).

“South Africans whistle‚ we do that.

“That’s the saddest moment I have.

“Kanti ngenzeni engaka madoda (what is it that I have done to anyone‚ really)‚ huh?

“The people that I work with will tell you that the things that I do at training they’ve never seen before.

“It’s because I never Google and I don’t copy anybody. I create things.

“And I’m not praising myself. You can ask anyone from my technical team members. They will tell you…

“I’m not saying hire me or whatever. I’m used to the scenario (of being overlooked) and I lived with it. But really people‚ hhayi suka (go away man).”