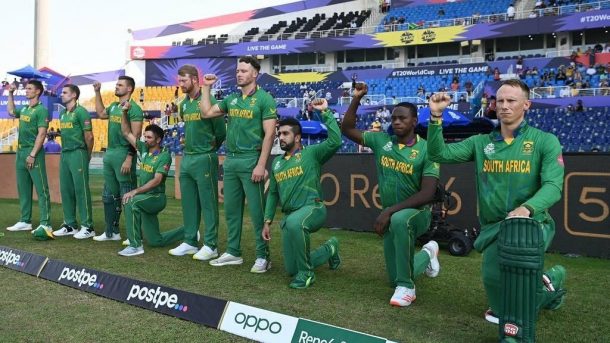 The board of Cricket SA (CSA) has taken a drastic but welcome stance and ordered all Proteas team members to take the knee in their remaining T20 World Cup matches in the United Arab Emirates.

CSA was left embarrassed after the team displayed different postures in support of the Black Lives Matter (BLM) movement with some team members taking the knee‚ while others remained on their feet and raised their fists before the Proteas were clobbered by Australia in their opening World Cup assignment.

The team posture‚ according to the CSA board‚ created an unintended perception of disparity or lack of support for the BLM movement.

The board said it met on Monday evening and unanimously agreed to issue a directive requiring all Proteas players to adopt a consistent and united stance against racism by taking the knee before the start of their remaining World Cup matches.

They then face Sri Lanka in Sharjah on Saturday and Bangladesh in Abu Dhabi on Tuesday in their next two matches before returning to Sharjah to conclude their pool stage against England on November 2.

Given SA’s dark history of racism under apartheid‚ the CSA board said it felt it was important for the Proteas team to be seen taking a united and consistent stand against bigotry.

The board said several other teams at the World Cup in the United Arab Emirates have embraced taking the knee and they now want all Proteas players to do the same.

CSA board chairperson Lawson Naidoo said a commitment to overcoming racism is the glue that should unite‚ bind and strengthen the cricket community‚ and that race should not be manipulated to amplify the organisation’s weaknesses.

“Diversity can and should find expression in many facets of our daily lives‚ but not when it comes to taking a stand against racism‚” said Naidoo.

“South Africans were recently joined by people across the world in celebrating the 90th birthday of our revered Archbishop Desmond Tutu.

“What better tribute from the Proteas to an icon of the struggle for freedom in SA than to demonstrate we are working to fulfil his vision of a united SA.”

The CSA board said cricket is the second most watched sport globally and the T20 World Cup‚ being held in the United Arab Emirates and Oman‚ is the ideal platform for the Proteas to highlight the national resolve to heal the divisions of the past.

The board said it is actively promoting a holistic transformation strategy that embraces the diversity with which SA has been blessed.

It said it believes success both on the field and beyond the boundary will be guaranteed if all South Africans stand united to build a new innings based on the pillars of inclusivity‚ access and excellence.