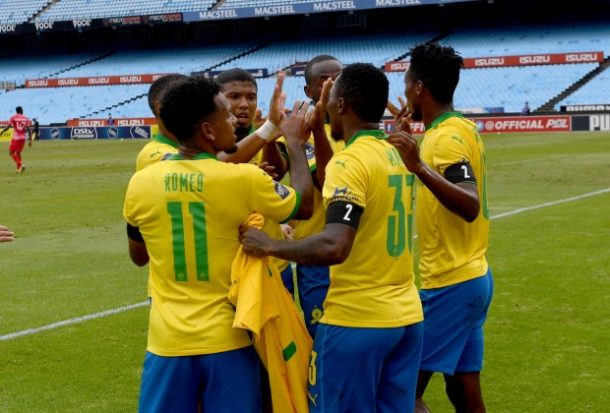 Champions Mamelodi Sundowns extended their lead at the top of the standings after they beat Chippa United 2-0 at Loftus on Sunday afternoon.

Second-placed Supersport United had been nipping at their heels before Sunday’s encounter but first half goals from Lebohang Maboe and Gaston Sirino enabled the Brazilians to open up a five-point gap at the summit.

The home side often cut the Chippa rearguard like a hot knife through butter and it was excellent goalkeeping by Ayanda Mtshali‚ poor finishing and suspect decision-making in front of goal that prevented the visitors from being buried under an avalanche of goals.

It was testament to the sterling work that was done by Mtshali in the back that the goalkeeper walked away with the man of the match award.

The final score was flattering to Chippa and Sundowns were denied a third in the second half after Mosa Lebusa thought he had put the ball in the back of the net. But after consulting the assistant referee‚ the match official ruled the goal as an offside.

Sundowns signalled their intent after the hardworking Peter Shalulile delivered a perfect cross into the area that Maboe rose majestically to power home into the top left corner‚ beating the Chippa goalkeeper in the 23rd minute.

Shalulile was delivered another assist when he set up Sirino for the second in the 39th minute. Chippa somehow managed to prevent a carnage and restricted the champions to just two goals.

Disappointed Chippa coach Dan Malesela admitted the final score could have been worse and they were fortunate that they escaped a more humiliating fate. He said his players were flat and he would ask them to explain why they did not rise to the occasion

“Actually we were very lucky to be beaten 2-0. It could have been five or six or something like that‚” he said.

Sundowns coach Manqoba Mngithi said they should have punished the Eastern Cape visitors but were content to emerge victories.

“I think we could have easily scored six or more goals‚” he said.

Sundowns dedicated the game to their player Motjeka Madisha‚ who died in a horror car accident in December.

The club confirmed a few days ago that Madisha will finally be buried next week.

The 25-year-old from Ga-Madisha village in Zebediela‚ Limpopo‚ died when the vehicle he was travelling in crashed into a steel pole in wet conditions and burst into flames near Kempton Park in December.