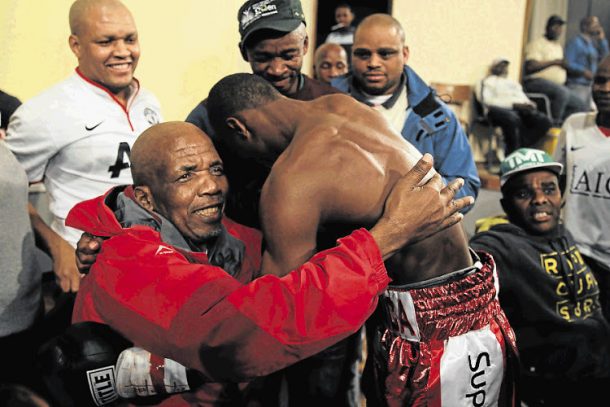 Bungu remembers Mnguni: ‘Hlathi‚ tell me and be honest with me‚ are you going to really beat McKinney?’

The death of boxing icon Mzimasi Mnguni has robbed the sporting fraternity of a father figure who changed plenty of lives in the game.

One such life was boxing legend Vuyani Bungu’s.

The outcome was voted as the upset of the year by several international boxing publications‚ including the authoritative Ring Magazine.

But for Bungu‚ who went on to set a record for most world title defences by a South African boxer‚ the feat was just one of many Mnguni’s gym strategies.

Bungu started boxing under Mnguni as a 15-year-old amateur and rose through the ranks culminating in the improbable win over McKinney.

“To Bra Mzi‚ beating McKinney was not really an upset because we had planned it in the gym‚” Bungu recalls.

“Remember I started boxing under Bra Mzi when I was a 15-year-old and finished my career under him.

“So he knew my strength and weaknesses.”

After McKinney had dethroned Bungu’s stablemate and friend Welcome Ncita in 1992‚ and also beat him in the rematch‚ Mnguni was so crestfallen that he spent days plotting for his revenge.

McKinney had dethroned Ncita under controversial circumstances when he knocked him out in 11 rounds of a fight the American was losing.

In fact McKinney turned his back during the fight as Ncita applied pressure but strangely the referee did not stop the fight.

In their rematch‚ Ncita’s eyes were swollen and he could not see.

At one stage the referee wanted to stop the fight when he temporally called a halt and asked Ncita if he could see the number of fingers he held up.

“How many fingers are these‚” the referee asked Ncita.

But Ncita could not see them‚ prompting Mnguni to shout ‘mithathu’ outside the ring in Xhosa.

After Ncita’s second loss‚ Mnguni told Bungu that he wanted him to beat McKinney.

Bungu said the fight was offered to him without Mnguni asking him if he was keen to fight McKinney.

“He convinced promoter Rodney Berman to give me the fight and came to me to inform me that I was to challenge McKinney‚” Bungu recalls.

But on the day of the fight‚ Mnguni was so nervous that he came to Bungu’s hotel room smoking non stop.

“I could see that he was nervous because he smoked one cigarette after the other. He asked me: Hlathi (Bungu’s clan name)‚ tell me and be honest with me‚ are you going to really beat McKinney?”

Bungu assured Mnguni and told him not to worry and 12 hours later he had caused one of the biggest upsets in boxing.

This even prompted the late struggle icon Nelson Mandela to congratulate Bungu for the win.
The relations between Bungu and Mnguni would continue en route to the boxer setting a new SA record.

“To me Bra Mzi was the father‚ because our relationship did not end in the ring.
“After making enough money I left the Mdantsane township and bought a house in one of the East London suburbs through his advice. He was also present at my wedding.”

Now 53 years old‚ Bungu feels Mnguni’s life should be celebrated because his death marked his rest from the pains of illness.
“He is resting now and we should be happy for that.”