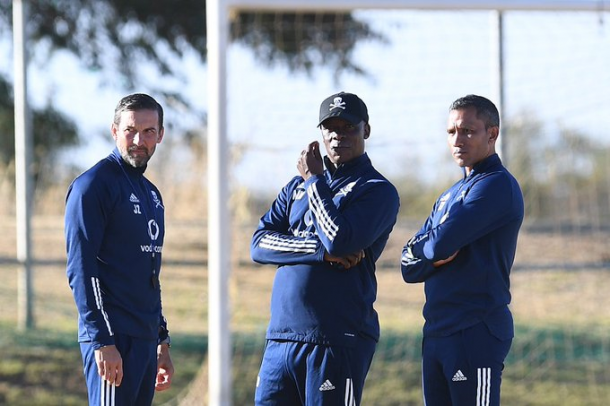 Orlando Pirates coach Josef Zinnbauer has painted a grim picture on the progress of injured striker Zakhele Lepasa‚ saying the Soweto-born player could be out of action for months.

Lepasa has been out since December 2020 after picking up an ankle injury and the German trainer admitted he is no closer to returning to the pitch. The Bucs struggled upfront without Lepasa‚ with Gabadinho Mhango and Tshegofatsho Mabasa also constantly in and out of Zinnbauer’s team due to their niggling injuries.

Asked specifically about Lepasa’s progress‚ the Bucs coach didn’t mince words and said he expects the player to be out for more months. But Mabasa‚ who is also recovering from an injury‚ has started light training with the rest of the squad.

“Lepasa is far from returning … I think it’s months‚” said Zinnbauer. “We’re not speaking about days or weeks‚ but months. He needs time because this was a very difficult injury‚ which is why I say it could be months before we see him play again.”

On a positive note‚ Zinnbauer revealed that promising 20-year-old Ghana striker Kwame Peprah was undergoing a medical at Pirates on Wednesday with a view to be signed‚ just three days before the defending champions Bucs meet Swallows FC in an MTN8 quarterfinal at Orlando Stadium.

Peprah is being signed after scoring 12 goals in 32 league matches for Ghana Premier League team King Faisal after last season. Zinnbauer was only prepared to reveal that he was having a medical on Wednesday.

Bucs are believed to be preparing to offer Peprah a three-year contract‚ but it is not clear if he will be ready for Bucs’ showdown against Soweto rivals Swallows‚ a side drew 1-1 they with twice in the league last season.

Zinnbauer‚ though‚ said they’re prepared to defend the title they won last season after his team had gone six years without winning any major trophy in SA football.

“It’s good and important to have a good start in the MTN8. Last year we won the title and it was a good feeling for us and the supporters. We know that the other teams will fight for this title and it’s a good thing for us. We’re looking forward to it.

“We have to win this game against Swallows before we speak about the next game. It’s a long way and in this competition you have quality teams.

“Yes we won the title but the other teams are all prepared this season to win titles‚ starting with this MTN8. We know and we’re looking forward to winning this game before we speak about the next.”