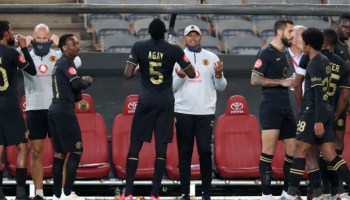 Fresh from the heartbreak of narrowly missing out on the Premiership title on the final day at the weekend‚ Kaizer Chiefs’ anguish could continue as they shift focus to their CAS appeal against a Fifa ban.

Chiefs were banned by the world governing body in February from signing players in the next two transfer windows after the club was found guilty of signing midfielder Andriamirado “Dax” Andrianarimanana when the Madagascan already had a contract with Fosa Juniors in his home country.

‘Dax’ was suspended for four-months and ordered to pay close to R640‚000 in compensation to Fosa Juniors by Fifa‚ while Chiefs were banned from buying players.

Chiefs launched an appeal soon after the ban and will know their fate on Wednesday as the Court of Arbitration for Sport (CAS) hands down its ruling at a hearing at its Lausanne headquarters in Switzerland.

But the millions of Chiefs fans will have to rely on guess work on whether the club remains confident of a positive outcome after spokesperson Vina Maphosa bizarrely declined to offer a detailed comment on the eve of the hearing.

“We issued many statements and interviews when we lodged the appeal (in February). Next comment will be on the outcome of the appeal‚” was all Maphosa would say on Monday.

It is not clear whether the matter will be heard virtually or the Amakhosi hierarchy and legal representatives will travel to Lausanne or not as Maphosa did not offer further details.

The ruling by CAS could have far-reaching consequences for Chiefs after Premier Soccer League (PSL) chairman Irvin Khoza announced last month that the new 2020/21 season is scheduled start in the first week of October.

It will be a massive blow if the ban is withheld by CAS as Amakhosi pick up the pieces and enter a sixth straight season without winning silverware.

PSL chairman Khoza also revealed the planned start date and transfer windows for the next season at a media briefing last month.

“The PSL registration window has been agreed by the executive committee to be September 22 to October 17‚” Khoza said.

“That is the first window. The second window will be February 1‚ 2021 to March 1‚ 2021. The start of the new season of the Premier Soccer League is presumed to be October 9.”

The four-month ban on the 29-year-old “Dax” ended in June and the midfielder‚ now on the books of Black Leopards‚ has already featured in the bio-bubble for the Limpopo.