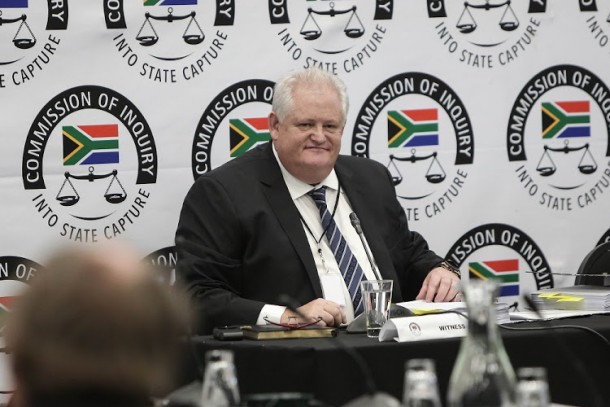 Agrizzi presented a video on Thursday showing wads of cash amounting to R1m being counted for the payment of “bribes”. The six-minute video was allegedly recorded inside a vault used by Bosasa CEO Gavin Watson.

Agrizzi told how millions of rands were stored in the vault and frequently replenished because of the number of bribes that needed to be paid.

Popcru spokesperson Richard Mamabolo said: “For us‚ this comes as no surprise‚ and confirms our long-held suspicions over the highly controversial relationship Bosasa has over the years had with DCS.”

https://youtu.be/ERj1JM5f4i4
He claimed there were “many unanswered questions” over DCS awarding tenders to Bosasa‚ Phezulu and Sondolo IT “for erecting fences and installing dysfunctional surveillance equipment in prisons across the country”.

Law firm Hogan Lovells South Africa‚ however‚ said on Friday that it was appalled and shocked by the allegations made by Agrizzi‚ linking one of the firm’s former partners to Bosasa’s corrupt payments to government officials.

“We are deeply disturbed by what was claimed… before the commission. We strongly condemn all forms of bribery and corruption‚ and our first priority is to understand for ourselves the events which are alleged by Agrizzi to have taken place. We will take the appropriate actions and will report any criminal conduct to the relevant authorities‚” said Nkonzo Hlatshwayo‚ chairman of Hogan Lovells South Africa.

Agrizzi implicated Brian Biebuyck‚ a former lawyer at Hogan Lovells‚ who left the firm at the end of March 2017‚ in his testimony before the commission.

The inquiry adjourned on Thursday after a protracted delay owing to a “security situation”. Agrizzi had earlier raised concerns about security access at the commission because he had seen a Bosasa employee‚ Solomon Segale‚ standing with a group of policemen.