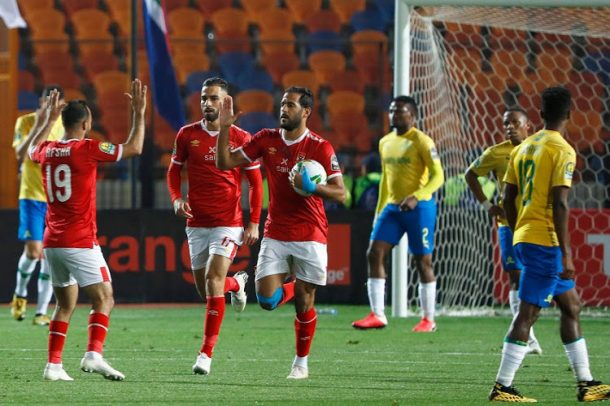 Boost for Al Ahly ahead of Champions League showdown against Sundowns

Al Ahly were somewhat bruised and battered when they flew into OR Tambo International Airport on Monday but first leg goal hero Ali Maaloul and two key other players have since resume training and are likely to play against Mamelodi Sundowns on Saturday.

Tunisian international left back Maaloul scored both goals – the second from the penalty spot – to give Al Ahly a 2-0 win in the African Champions League quarterfinal first leg and will be available to defend the lead in Saturday’s second leg in Atteridgeville.

He and veteran right-back Ahmed Fathi picked up knocks in last weekend’s first leg in Cairo but have since been passed fit.

Nigerian winger Junior Ajayi hurt himself in the gym‚ according to the Egyptian club’ website‚ but has also since made a full recovery.

The availability of all three is a boost for Swiss coach Rene Weiler as he plans for the second leg.

Al Ahly’s early arrival in Johannesburg – they flew back on the same plane as Sundowns – reflects their desire to properly adapt to the high altitude which caught them cold last year.

It is medical convention that athletes coming from sea level need at least five days to get used to the rarefied air and Ahly have sought to ensure they will prove competitive by giving themselves a better chance to adapt.

Last year when Sundowns handed them a record 5-0 thrashing at the same stage of the competition‚ it was clear the Egyptians struggling with the Highveld altitude.